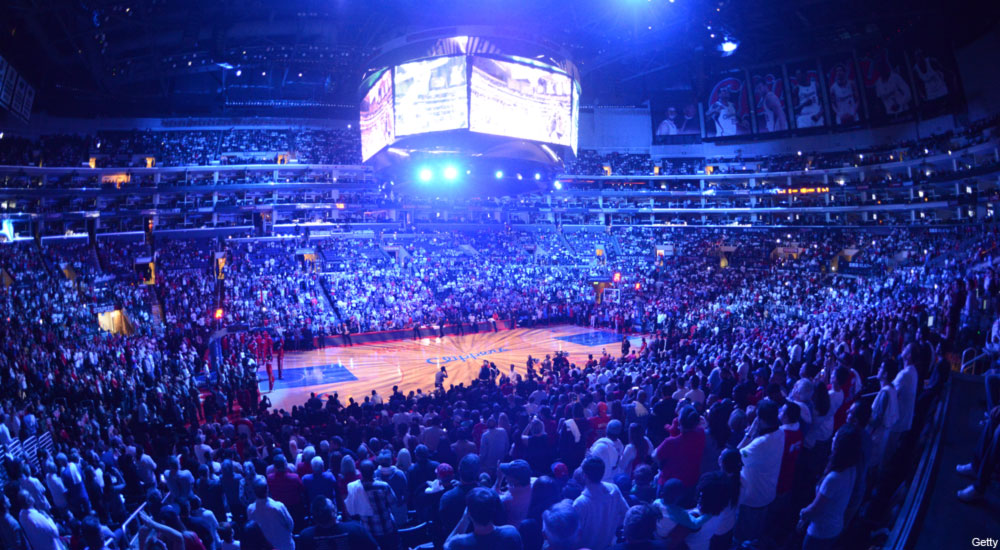 I really can’t believe I’m saying this, but the Clippers sure know how to throw a home opener.

Call it the eradication of Donald Sterling, the arrival of Steve Ballmer or the urgency to win in a deepening West, but last night the fans came out in droves to watch the Clippers take on the Thunder in the first game of their 2014-15 campaign, and from the get-go, it was clear that they came not only to root on their favorite team. They came to be entertained. They came expecting a show.

And a show is what they got. In this new Ballmer Era of bulging eyes and flailing fist pumps and awesomely awkward yelling, Clippers management put forth an all-encompassing product finally worthy of the team itself.

They organized a huge FanZone experience outside of the Staples Center, which filled Chick Hearn Ct. with giveaway booths and portable hoops and blaring music and, most importantly, people; people stopping to have some pre-game fun and people clamoring to get inside early. Inside, seats were full by the time Fergie killed the national anthem (I know, I was shocked too) and the new LED lighting system dimmed.

I think we were all expecting Ballmer to make a big show of the first game, especially after his theatrics with season ticket holders and the dramatic mini-movie that ran nationally on TV earlier this week. But what happened next took everyone by surprise. They announced the Thunder starting lineup, they shut down the lights, and then the court literally sprung to life.

A nearly one-minute intro danced across the hardwood in an illuminating three-dimensional light show, on the floor itself, that included highlights, greetings from players and a crumbling effect that looked like the Staples Center floor had melted away in a sea of red and blue. It was astonishing. It was very Hollywood. It was not very Clipper-like.

They ran a similar, much shorter 3D projection on the court in Cleveland earlier that night, and I have to imagine the NBA made sure it was no coincidence that the Cavs and the Clippers were the first two teams to debut it, for very different reasons. But whatever the motive, the effect set a clear tone to the Staples Center crowd, and it’s one that Clipper fans like myself have been waiting to see for a long time.

Where the 3D light show drove the Cavs fans into a frenzy, it mostly left Clippers fans stunned. This is a level of production, planning, fore-thought and attention to detail that simply is unfathomable for the franchise. Where for a team like the Cavs, the fans and management have suffered together through terrible play on the court, it has always been the Clippers fans and players who suffered together through terrible management.

Even when the Clippers were good, when Elton Brand and Sam Cassell sparked a post-season run or when Lob City took the team to new heights, promotion and marketing always held an ironic, tongue-in-cheek, almost novelty kind of vibe. Like this success was fun but fleeting, and would soon be gone and replaced. Through it all, the despised owner basked in his courtside seat next to a flock of girlfriends while no one told him he wasn’t wearing any clothes.

Now, though, there was a sudden reversal. State-of-the-art technology and graphics splashed on to the very playing surface, followed on the overhead, eight-sided jumbotron by a beautiful highlight package promoting the team’s stars and head coach that had just debuted on every television across the country. And through it all, the new owner sat and watched intently and when the lights came on he stood and cheered with his trademark enthusiasm.

Even from my seat way up in the top level and on the other end of the court, the huge figure and Ballmer’s shiny bald dome were clearly visible. In person, even from a distance, he is magnetic and strange—like a bald, sweaty centaur. I got texts from friends telling me about his bizarre interview on TNT and his over-enthusiasm during the game, but I didn’t need them. I could see it for myself, the new owner of the Clippers trying to connect with his new team and its fan base by joining in the chants and losing his mind when JJ Redick hit two free throws to put them up by three late in the game. Ballmer is quite often over the top, sometimes embarrassingly so, but his actions sent a message to the fans: You and I are here to support them. You have to understand this is a novel concept in Clipperland.

Things are not perfect for the Clippers, though. Anyone who watched them squeak by the Thunder, without both Durant and Westbrook, definitely hasn’t rushed to bet on Lob City just yet. It will take time to adjust to the loss of Darren Collison, and the arrival of Spencer Hawes, and rebounding remains a huge issue. At one point in the third quarter, I imagined what a team like the Mavericks would do if the Clippers played them like they did last night, and literally shuddered.

But for the first time, all the pieces seem to be in place, especially the most important ones: Talent, experience, coaching and an owner who isn’t afraid to admit it isn’t all about him. It’s all about the players, and he’ll give us a show to prove it.

Ryan ZumMallen writes about sports and cars from his home in Long Beach, CA. You can find him on Twitter @Zoomy575M.