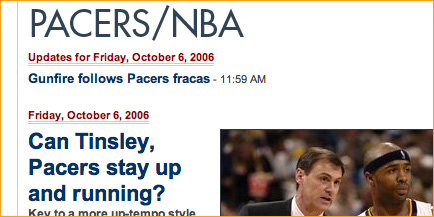 So the Pacers got rid of Ron Artest and were ready to move on, to build a team that would

connect better to the community and perhaps be a better reflection of the people that support their franchise.
And then this happened.

Here’s what we know: Four members of the Pacers (my main man Stephen Jackson, Jamaal Tinsley, Marquis Daniels and new guard Snap Hunter) were at a strip club at 3:00 a.m. Sure, they’re in the middle of training camp and should probably be focused on working out and, for Hunter at least, making the team. But heck, it’s a strip club, it’s Indy…

According to the Indy Star, someone punched Stephen “Whoo!” Jackson in the face and then tried to run him over with a car. S-Jack then allegedly grabbed himself a gun (his own, which he had permits for) and he squeezed off five shots into the air. One of the Pacers had pot in his car, and Tinsley and Daniels also had guns in their cars. (Remind me not to ask to borrow any of the Pacers’ cars).

Thus far, none of the Pacers have been charged with doing anything other than being dumb. The Pacers say they’ll have a statement later today. The Blazers say they’re interested in picking up any of of the four to team them with Zach Randolph.

UPDATE: 12:17 p.m.
I just went on the Pacers page at indystar.com to see if there was any new news on the situation and came across this…

Um…maybe not the best way to phrase that second part, considering what happened the previous evening.