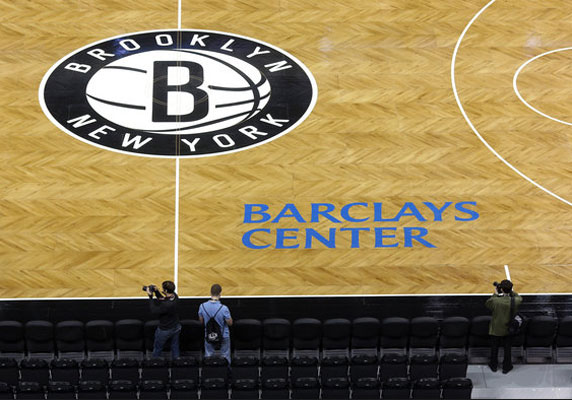 An official ribbon-cutting ceremony was held on Friday at the new, 675,000-square-foot Barclays Center to celebrate Brooklyn’s first major pro team since 1957.

When he bought the Nets two years ago, Mikhail Prokhorov joked that developer Bruce Ratner showed him a “hole” at the corner of Atlantic and Flatbush avenues. But the Russian owner was glad that Ratner saw the $1 billion arena through to completion.

“Not everyone gets to be part of a project that changes the face and the destiny of this city,” Prokhorov said. “Maybe those who were at the opening of the Brooklyn Bridge, they could say, ‘We saw a symbol being born.’ And I do believe we are all the lucky witnesses to such an event, because Barclays Center arena is so much more than just a building. It will be the place where everything is happening and everyone is welcome, if you are Brooklyn or Manhattan, Miami or Moscow. Barclays Center will be the heart of the Brooklyn borough.”

The exterior is made of weathered steel and glass. An oval oculus wraps above of the main plaza, framing the sky. The glass-enclosed arena gives streetwalkers a clear view of scoreboard, and patrons a feeling of being out on the Brooklyn sidewalks. After heading through the main gate, fans will step into a 9,000-square-foot atrium, which offers excellent views of the herringbone-patterned court as well as the Nets’ practice court.

The Nets will make their Brooklyn debut with a pre-season game on Oct. 15.