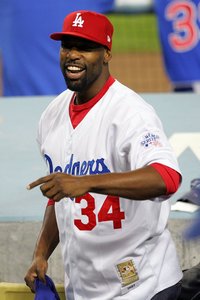 Bad news, Clips fans. Real bad news: Come opening night, you will not get to watch your new, shiny, and expensive point guard. In fact, he might not be around for the next four-to-six weeks.

The Boston Globe has the scoop:

An NBA source told The Boston Globe on Sunday night that the Clippers are fearful that newcomer star guard Baron Davis could miss as many as 4-6 weeks due to a sprained ring finger on his left hand that could require surgery.

Talk about a bummer for the Clippers. B-Diddy, who sprained the finger during practice, will find out today exactly how long he’ll be in street clothes, and if he’ll have to go under the knife, following a visit from a doctor.

It’s not all bad news for the Clips Show; rookie Eric Gordon has been playing well this preseason and should be able to help hold the fort (somewhat) until Davis returns. Hey, I’m just trying to stay positive here.