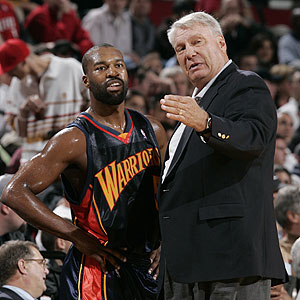 -Baron Davis has figured out what it’ll take for coach Nelson to return to the sidelines: Love and money.

“A lot of hugs and kisses,” Davis said. “And some stocks.”

“I’m worried, but at the same time, I’m not,” Davis said. “I know that Chris Mullin and our management team, they’ll figure it out with coach. Everybody will play fair.”

Even though Russ doesn’t agree, The Baron went on to say that he thinks Don Nelson deserves a raise.

-Spike Lee is happy that Greg Oden signed with Nike instead of Adidas. (Via: Inside Hoops)

-Is Gary Payton about to hang up his sneakers for good? Funny, I could’ve sworn the guy had been out of the League for years.

-The Wolves’ Corey Brewer has a pretty high basketball IQ and picks things up very quickly.

“My biggest thing is the way he picks up on things,” teammate Randy Foye said. “Coach explains it, and five minutes later he’s out there performing it.”

-George Karl wants free agent Steve Blake to continue running the point for the Nuggets. After Lil’ Stevie’s impressive showing in the San Antonio series, I think the Nuggets should do everything possible to sign him up.

-Billy King and the Sixers are interested in Darko.