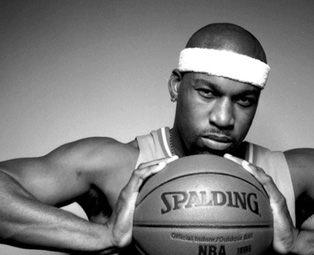 Hey hey…I’m back in action. I’ve been in the office the last few days, but I had to pretty much isolate myself (even broke out my headphones) and bunker down to hammer out the NBA Preview for SLAM 103 (on newstands next month!), which turned out to be the longest thing I’ve ever written for SLAM. I was kinda overwhelmed with words the last few days. I’m back though, rejuvenated after watching the debut of The Amazing Race, the cast of which includes a coalminer this season.

Also need to send a shoutout to Survivor, because there’s a Linkstigator’s husband in the cast. I’m not sure if I’m allowed to say who it is though.
Luckily, we’re still in the doldrums of the NBA season, so I haven’t been missing much.

• Let’s all take a second to send out good vibes to the Duquesne basketball players who were shot over the weekend. The most seriously injured appears to be Sam Ashaolu. I spoke last night with Sam’s little brother Olu, my main man and one of the top players in the class of 2008, and told him we’re all thinking about him and hoping for the best.

• The final roster spot in Chicago looks like it’s coming down between Luke Schenscher and Shawn Kemp, although Kemp probably didn’t help himself by not showing up for a workout with the Bulls yesterday.

• Bonzi Wells is talking to the Rockets and the Nuggets.

• Devin Harris has spent his summer shooting between 600 and 700 jumpers a day. Just curious, but why are we excited about this? Isn’t he a professional basketball player? Shouldn’t he have been working on his jump shot before now?
• The Celtics say they aren’t concerned about Delonte West’s back, even though he missed a dozen games last season with a bad back and they picked up two point guards this summer.

• Steve Nash had his jersey retired in Cali yesterday, and he gave an improvised ten minute speech.
• I like that the Nets are describing Mile Ilic as a “stone cold center.” I bet Clifford Robinson likes it even more. The Nets also signed a lease that could keep them in Jersey through 2013 in case the whole Brooklyn thing doesn’t work out.

• For some reason, it’s big news in Cleveland that Greg Anthony likes the moves the Cavs have made.

• Nate McMillan has the Blazers in working out early up in Portland. The only Blazers not to show up yet include Darius Miles and Jamaal Magloire. Surprising to anyone?

• Congrats to Jazz coach Jerry Sloan, who was married over the weekend.

• Check out who’s playing QB for Lehigh: Sedale Threatt! No, not the old school NBA guard, but his son (one of two sons he has named Sedale Threatt, Jr.).

• Finally, the Heat are bringing back my man Shandon Anderson. He’ll make nearly $10 million this season, although it appears over $8 million of that will come from the Knicks.