Baron Davis: The Hunger for More 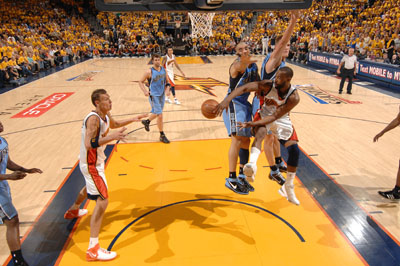 Baron Davis has always been capable of dominating the opposition. He’s big and strong, has a good jumper, finishes well around the basket and is virtually unstoppable in the open floor.

But up until this season, he had yet to put everything together. Maybe he just needed something to believe in…or better yet, a team and a city to believe in him.

After being traded to the Warriors from the New Orleans Hornets in February of 2005, Davis’ first 28 games with the Warriors showed promise (he averaged 19.5 points and 8.3 assists per). Though they missed the Playoffs for the 11th straight season, there was hope after all: B. Diddy led the team to an 18-10 record while racking up back-to-back Player of the Week awards.

Golden State started off the next season on fire, winning 11 games in November, but the flame was extinguished with Davis missing 28 games, as the Warriors lost 10 of their last 15 games to completely kill any thoughts of a Playoff seed.

But what a difference an off-season can make. A Jason Richardson season-ending Playoff promise, the firing of coach Mike Montgomery, Chris Mullin’s wooing retired coach Don Nelson back to the bench, a blockbuster trade and suddenly B. Diddy and the Warriors looked to be at least in a position to make the Playoffs.

Up until the January 17, 8-player deal that got rid of Lil’ Dun and Troy Murphy and netted Al Harrington and Stephen Jackson, the Warriors were 18-21.

After finally getting healthy and gelling with his new teammates, Davis led the team to nine wins in their last 10 games and into the eighth slot in the Western Conference Playoffs. This was the first postseason trip for Golden State in 13 years.

Exhibiting the heart of a lion, Davis endured bumps, bruises and a pesky knee injury to put the Warriors on his shoulders in their time of need.

The Warriors began by stealing the first game in Dallas with a stellar third-quarter performance that surprised
Davis himself.

“I can’t even remember the last time I had a quarter like that,” said Davis, who scored 19 of his 33 in the third.

After getting ejected in Game 2 in a losing effort, the world thought Davis and company were done. The loss even prompted TNT analyst Charles Barkley to predict that the Mavs would win three straight to close out the series.

Headed back to Oakland for two games, Davis had something else in mind. Playing the first Warriors home Playoff game since ’94, Davis fed off the viral energy of the capacity crowd and poured in 24 points and 5 assists in the 109-91 route of the Mavs.

The second home game would be the tipping point in the series. Davis had another great game, even banking in a half-court three-pointer at the end of the first half to effectively take Dallas’ heart.

After losing a closely-contested Game 5 in Dallas, the Warriors returned to Oracle Arena in front of a record crowd, and in Willis Reed-like fashion, Baron ignored a strained hamstring to will Golden State to victory. Hopping on one leg all night, BD gave a truly gutsy performance with 20 points, 10 boards and 6 assists.

For more on this story, check out SLAM issue #110.