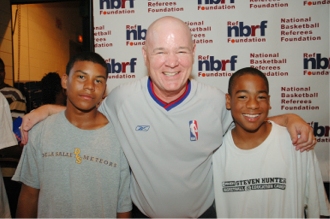 The 100,000th commenter contest update: We have got a little over 1,000 to go. I’d appreciate it if someone would step up and claim their destiny, cause I don’t want to have to keep checking. We have plenty of variety scheduled in our posting this week, so there’s something for everyone.

In NBA news, it looks like another round of ref scandal is spreading. Great. There was a time when many of us thought David Stern had gone a little power mad and was becoming a little too much of a tyrant. Now he has cause to say “Look, this league needs my reign as I bring law to the lawless. Refs are no longer allowed to even look at a casino.” Should be interesting when the Kings play home games in Vegas. I was sad to read in both Mutoni and Holly’s posts that Adam Morrison is out for the year. I think I may have been the only person left that still believed he was going to become a solid NBA bench player, like a 16 ppg instant offense scorer. That is becoming more doubtful. Also the J.R. Smith “saga” is taking unfortunate turns.

Note: There is something about the name J.R. that makes NBA people crazy. Let’s not forget J.R. Reid, who tried to end A.C. Green’s consecutive games streak with the least subtle forearm shiver in history. J.R. Rider, no further elaboration needed.

On the topic of reffing and the supposed impartiality of the position, I worked as a referee for my football league yesterday. It’s mandatory that each player does that once a season. And let me tell you, I was giving every call to the team that was absorbing a Patriots-Dolphins brutalization. I didn’t like the rah rah attitude of the winning team, so I started making calls against them like I had money on the game.

But my biased officiating made no difference, that’s how ugly it was out there. The good news is that the Brady-Moss connection was the second most prolific QB-WR combo of the day. My quarterback finally did his job, putting the deep ball in the air so Rubenstein could spread his wings and fly under it. Three TDs, three celebrations. We lost. But I did the frozen statue dance while two spectators ran up to me and pretended to take photos, the bow and arrow through the heart of my enemy dance, and the defiant head nod dance. I have a lot of TD dances.

Congrats to the Red Sox blah blah blah, it’s annoying how dominant the city of Boston (I’m counting the Pats in that group) has become on the sports landscape. I’m a big KG fan, but no city deserves a trilogy of terror like this. Don’t make me turn on him. Let’s go Rockies! Let’s go anyone else in the NFL! Giants are looking good. They are playing a winning brand of the sport of football. I have learned the hard way that overconfidence is for suckers. Like for example, Khalid “13-3” Salaam.