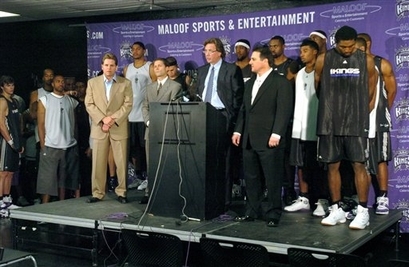 As you already know by now, Sacramento Kings coach Eric Musselman, drank, and then he drove. Perhaps as a way to show his players that he’s one of them. Probably not. It was a stupid mistake, and now he’s going to have to deal with internet ridicule. Like THIS! Drinking and driving is not a joke. He’s lucky nobody was hurt and the only thing damaged was his reputation. A reputation that will be mocked in places like this and continued here.

I find it interesting how the summer was so quiet with a pretty lame free agent and trade season, and ever since the FIBA world championships the big story was the NBA switching to that new wacky ball. Jack McCallum writes a piece about how the NBA isn’t the league of criminiminals that people stereotypically believe it to be, and then BAM. Stephen Jackson throws five shots in the air, Eric Musselman plays D&D, and in between there’s the whole Bassy-Fabolous situation.

Either the media/Hip Hop police is taking some real liberties and just making up a story by itself cause that kind of thing sells, or something happened. Fabolous has an album coming out, so getting shot helps him in a sick, sick way. He was on the Vh1 Hip Hop honors show doing Beastie Boys covers. It was his finest performance as a rapper. Bassy was robbed of his $50,000 piece of jewelry. Two guys from Brooklyn were at the same restaurant in the city at the same time. That happens every day. They say there’s video that supports this whole thing, but I haven’t watched it yet. If there really is a connection here, well, then Bassy is really upping the ante for NBA troublemakers.  Hopefully more news will come from this story, proving something one way or the other. Did they ever figure out if Tony Yayo shot Busta Rhymes’s jewelry holder?

Moving on to some self-promoting news. According to Daily Basketball, Slamonline is #2 on the basketball blog list behind only True Hoop. THAT IS WHAT IS UP!!!

Also, I played in my touch football league yesterday in a game that was so serious, there were dudes wearing underarmour shirts with nothing over them and compression tights. Really it was too serious for my taste. I was wearing a sweatshirt. Depsite that, I found out that nobdody in my league can run with me. Call it deceptive speed if you will, but I roasted the guy that was supposedly covering me, caught my deep ball and danced all the way to the endzone, then I kept on dancing. Later on, they were actually doing some strategy stuff, rotating a safety over to double me. Damn, little old me? One guy came from out of nowhere and picked off a sideline pass to me and ran it back. I blame my QB for telegraphing the throw. I’m like T.O. baby. I couldn’t get open after that but opened up the field for my teammates. Really got to work on my TD dancing though. I was off my game.