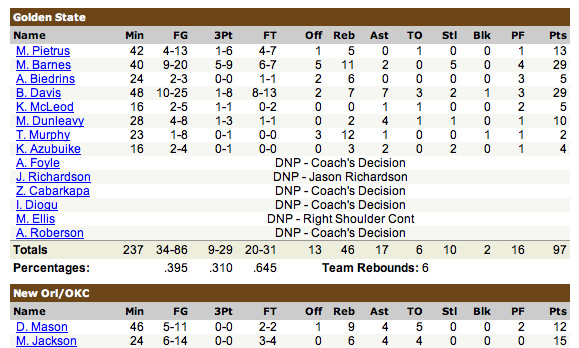 Just checked the Warriors/Hornets box score because I was curious to see how Nellie would use new signee Kelenna Azbuike. Because it’s Nellie, you know, and we were talking at work today about how Nellie would probably run him for about 42 minutes or something crazy.

Anyway, you know how in the box score they list the reasons why the guys who didn’t get off the bench did not play? For instance, Ike Diogu was listed as “DNP — Coach’s Decision.” And Monta Ellis, out with a shoulder contusion, was listed as “DNP — Right Shoulder Cont.”

But what about Jason Richardson, out with a broken hand and banged up knee? Well, look here…