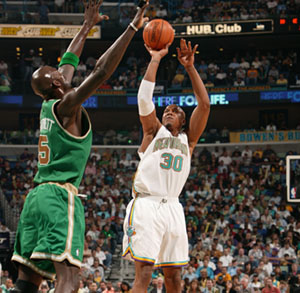 My big Hornets-related news is that I got my time with a Honeybee (Donna), and I’ve got the story and pictures to prove it. But that’s not coming til later today…In the meantime, let me hit you with some quick, belated game notes from over the weekend. I arrived at my seat at Saturday night’s Celtics-Hornets game with about nine minutes left in the second quarter—because of work (I was in the gym working out players until about 7) and a media credential snafu—so this won’t be long. I really must love working with kids to miss the beginning of this game, let alone all of Saturday’s NCAA Tournament action.

–Celtics were up 39-31 when I sat down. From the stats monitor, it looks like Paul Pierce and Rajon Rondo were doing the most damage.

–The N.O. Arena is packed and I later learn from Hornets PR guru Scott Hall that it’s another sellout and the biggest crowd of the season. The fans have completely transformed the atmosphere from what I experienced when I first moved to the city about two months ago. I think the shift really occurred after All-Star, when people started to realize not only is this team really good and the rest of the League has taken notice, but they could be gone very soon if attendance doesn’t pick up. Regardless of the motivation, it’s nice to hear the crowd lustily boo every time Boston has the ball. Makes me miss the heyday of AI’s reign in Philly.

–Faces in the crowd: LSU All-American defensive tackle Glenn Dorsey (who gets a standing O), former Saints special-teams standout Michael Lewis and quarterback Bobby Hebert (looking a little tipsy; I’ve heard parts of his sports radio show and I think he does that all the way drunk), current Saints running back Deuce McCallister, cornerback Mike McKenzie and Jared from Subway, of all people.

–I think recent acquisitions Sam Cassell and P.J. Brown will be extremely valuable to the Celtics in the postseason, but both vets have a considerable amount of rust right now. On the other side, Bonzi Wells has paid immediate dividends for the Hornets, providing them with toughness, energy, added offensive firepower (I would already say he’s the third option behind Chris Paul and David West), defense and another post presence. Mike James, not so much.

–Ray Allen shows off his veteran savvy by hitting a trey and planting himself right in front of CP, so that he charges into him right after catching the subsequent inbounds pass and turning around. He doesn’t have a huge night, but throughout the game I’m impressed by his fluidity, body control and the adjustments he’s made as he’s lost explosiveness.

–I like the fact that Julian Wright is coming on so strong lately, especially as a defensive stopper, but why does he get to iso so much? Scratch that, as he hits a trey a few seconds before the end of the half, followed by Rajon Rondo getting fouled on a coast-to-coast jaunt and hitting a pair from the line. Celtics are up 10 at the break.

–Speaking of Rondo, he’s clearly getting the best of CP tonight. He ends up with 23 (on 10-15 shooting) and seven dimes, but that doesn’t tell the whole story. His maturity, leadership and overall floor generalship (is that a real word?) have improved tremendously and while he’ll never be a marksman, his shot selection and ability to hit floaters have made him a legit 10-15 ppg scoring threat alongside weapons like Pierce, KG and Allen.

–On a night when CP was just average (for him; he ends up with 19 and 7, but he was in foul trouble and was outplayed by Rondo), David West stepped up big with 37. He was doing it from the post, off the drive, catch-and-shoot jumpers, in transition. KG, Leon Powe, Kendrick Perkins and P.J. Brown all took turns on him—and thay all got abused. Tyson Chandler and Bonzi didn’t put up huge stats, but they both had strong efforts. Jannero Pargo seems like he’s back in his groove, as he had 15 and 6 while CP was sitting.

–After the Hornets took their first lead of the night (94-93 with about six minutes left), they never looked back. CP came back for the stretch run and they ended up winning by seven, 113-106. As much as this team has grown on me, I wasn’t sold on them as a legit contender—at least not this season—until this game. Since I’ve been here, they’ve beaten the Suns, Mavs, Jazz, Rockets, Spurs, Lakers and now the Celtics (I’ve personally witnessed most of that slate) and to be honest, I can’t say any of those teams are an incredibly bad matchup for them. I guess we’ll find out soon.

–Check back later for Donna the Honeybee!