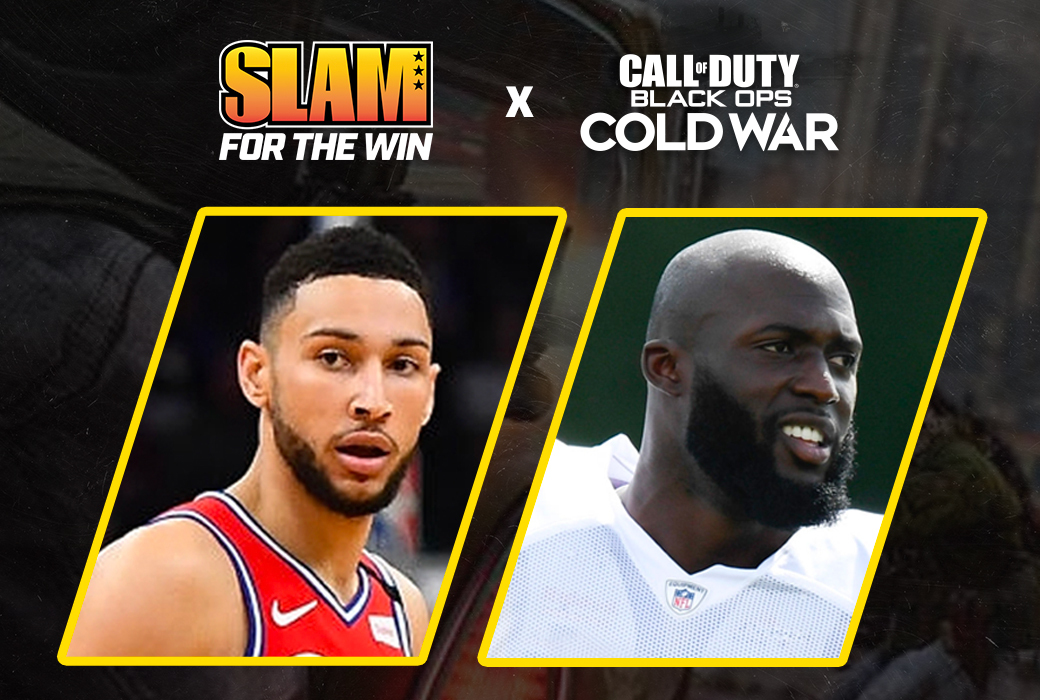 Ben Simmons talks trash on the court, but SimmoTheSavage25, in his own words, “talks a lot of sh*t” when he hops online to play Call of Duty: Black Ops Cold War. As he runs around, sniping people left and right, Simmo lets it be known that there’s no competition.

Man, we’re destroying these dudes, this isn’t even a competition.

I might just have to end this tournament early.

It’s November, and Simmons is playing in a tournament, hosted by SLAM FOR THE WIN against JaVale McGee, Josh Hart and Tampa Bay Buccaneers running back Leonard Fournette. While Hart had a viral reaction during the game, Simmons’ kill streaks back up all of his spicy talk: he racked up 224 kills and 126 deaths, 1.7 K/D.

Fournette also held his own with 103 kills and 78 deaths. A clean sweep.

“I’m playing against my children right now…and Josh is my oldest daughter.” Leonard Fournette GOT ME CRYING!! 😂😂 @_fournette

“It’s competitive,  but it’s kind of like a different world,” Simmons says later on a Zoom call with him and Fournette. “You can connect with your friends and I got a lot of friends that play the game at a high level. So it’s fun to, you know, compete and have fun doing it.”

Fournette says he only started playing COD recently during quarantine when Simmons encouraged him to play. Simmons was inside the NBA bubble, but had brought his PC with him. The two of them would play on teams with Travis Scott, Meek Mill and Young Thug. Plunder mode, then just Battle Royale in Warzone.

Lately, COD Warzone and Cold War have been the wave.

“[Warzone] is perfect for me,” Fournette says. “I’ll play that before I play the new COD.”

“Yeah, I’m the same,” Simmons adds. “I  think this is, like, probably the most perfect COD I’ve played just in terms of everything, mechanics, just the way it moves and feels. I feel like they did try to add certain things into the game during the start of it and took out what people didn’t like. Sometimes games don’t really listen to the players and that’s something the games gotta do.”

Simmons started playing when he was 12, after getting a television and PlayStation as a gift. Some friends then put him on to COD: World at War.

“I was hooked,” Simmons says, later adding: “It’s competitive,  but it’s kind of like a different world.”

Fournette, who stopped playing COD his junior year of high school, says that he likes how players are able to use streaming platforms like Twitch to give another look into their lives.

“I think for us, we’re using our platforms more,” he says. “[In] Twitch, [we let] people watch us play the game, [and] besides football, people are always interested in our lives other than sports. This is just a little piece of our lives that we give to them, [through] the game. A lot of people enjoy and love watching at least like ourselves play video games and you meet guys who make money off this, you know what I mean? You play with them everyday and you build a bond with them.”

He says that rapper Tee Grizzley is the most competitive, while Simmons argues Meek Mill is.

“He’ll try to get you,” Simmons explains. “He’ll try to run it up against you, but he likes the competitiveness of it.”

Simmons also plays with other athletes and celebrities, as well as pro gamers. In order to be the best, you’ve got to play the best.

“If I see somebody that I’m cool with, I’ll definitely join with them, but I got a bunch of different little crews and squads that I mix it up with,” Simmons says. “I like to play with a lot of pros too. I feel like that gets me better and to their level. It’s fun to, you know, challenge yourself.”

Fournette thinks Simmons is a cheater because he competes against other pro gamers that play all day, every day. Simmons recently joined FaZe Clan as FaZe Simmo, a popular gaming org that includes Zeno and Bronny James, amongst others. They regularly compete in tournaments and leagues.

“Ben be cheating, Ben is a cheater,” Fournette explains. “He’s really playing with people who game all day. Like, the guys I’m talking about, they have average jobs, they don’t be on the game all day. They just hop on whenever we hop on.”

Simmons isn’t having any of that.

When asked who they both would pick on their COD Warzone roster, Simmons’ first pick would be a gamer he met named Metaphor.

“I met this one guy the other day actually, his name on there is Metaphor. He’s trying out trying to get into FaZe right now,” Simmons says. “I’ll go with him, Ninja, uh, go with FaZe Temperrr and Zeno.”

And, after his playing career is over, Simmons says that he wants to continue to venture business-wise into gaming.

“It’s something that I’m in to,” Simmons says. “I find enjoyment out of learning about playing the game. So, if opportunities come my way with the game and not just being a basketball player, I’m taking it. That’s one of the things I do with FaZe.”

“How can I join FaZe?” Fournette asks him.

“You gotta get that snipe right,” Simmons responds.

But he admits there’s no secret to being good at COD.

“You gotta just be nice. It aint no secret, you gotta be nice,” Fournette says, before giving away a little trick. “The main thing is when you’re playing, like, in a group duos, trios, quads, win your one-on-ones. That’s all it is.”

“You’re either nice or you’re not,” Simmons adds.