Ben Wallace Has an Existential Query 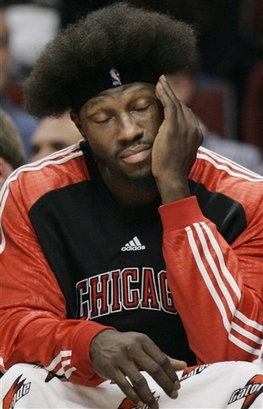 From time to time, each one of us asks ourselves the big questions in life: What is my purpose? Is there a God? Why is my creepy neighbor always spying me through his peep hole?

Well, NBA players are no different. Ben Wallace, vastly overpaid power forward for the Bulls had such a query following the Bulls/Suns game last night, and like most of life’s big questions, there might not be a readily available answer. From Hoopsworld:

Ben Wallace, who started and scored five points and 10 rebounds, saw barely eight minutes of action in the second half and delivered a goose egg in the second act as a result.

“It’s tough sitting on that sideline watching my teammates get beat up,” Wallace said. “If I can’t go out there and help my team get stops down the stretch, then why am I here? Why don’t we just go on to the house … pack it up?”

Good question, Ben. Why are you here indeed?

I had just assumed that when the Bulls made you one of the 20 best-paid players in the League, they made your role on the team clear (grabbing more than six boards per game, for instance; blocking more than one shot per game perhaps), but who takes the time to read the fine print anyway, right?