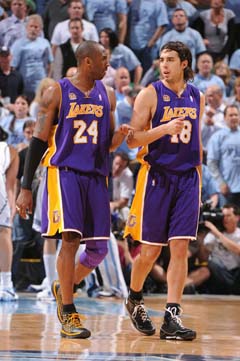 With Beverly Hills 90210 set to return tonight on the CW and the season still approximately two months away, this only seemed right.

A few notes before you read this:

–It’s kind of written in screenwriting format, as much as the software SLAMonline uses would allow. That’s why the dialogue is centered. I could be wrong, but I think that makes something this long easier to read, though some of the centering makes the longer speeches look funny.

–I’m not an expert on the first version of the show because I was 10 when it was huge. If you want something that’s a straight parody, I’m sure you can find that in the next Bill Simmons mailbag. That said, in order to bring some old-school 90210 perspective to future episodes along with some balance and true Laker purple and gold, I’ve enlisted our own Myles Brown to help out with whatever this becomes.

–This is not intended to disparage anybody. Any true resemblance to the real life people this is based on is mostly coincidence.

–The pilot is here mostly to introduce you to the characters. Don’t expect the world to explode. Without further adieu…

Sasha Vujacic (a.k.a Machine) is wearing nothing but jeans and a pair of shower sandals as he rubs a dense, exfoliating moisturizer into his coarse stubble. As he exfoliates, he gargles some Listerine and spits it back into the sink. He walks over to one of the nearby shower units and ducks his face underneath some high powered water pressure. The green moisturizer completely gone, he takes a warm towel and wipes his face off while walking back to the sink. He looks into the mirror and smiles.

Kobe Bryant enters wearing only a towel and a sly smirk. He walks up next to the sink next to Vujacic and flexes.

KOBE BRYANT
Machine, you been working on that English?

SASHA
Machine always working on everything. Nature
of Machine.

KOBE
(flexing, then stretching out his wingspan)
Okay, define “lithe”.

SASHA
Thing on tree that change colors then falls
to ground, but not in Los Angeles.

KOBE
(smiling)
If anyone asks, it means “Kobe”.

Kobe looks at him quizzically and heads out of the room, eyeballing him suspiciously the entire way.

PHIL JACKSON
What the–

JACK
Listen, coach, I know you’re good at managing egos,
so I figured you could help me out.

JACK
Well, I saw this new movie, The Dark Knight, and
I think the dead Ledger kid out-acted me.

PHIL
Apples and oranges, Jack. Two completely different
takes on one character. Nothing to beat yourself up over.
Can I interest you in a piping hot cup of chamomile tea or
a copy of Scared Hoops?

JACK
No, thanks. Coach, I just can’t get rid of these jealous pangs.

PHIL
You would never have been able to play the part
that way back in the day anyway.

JACK
You think so?

PHIL
I do. It was a different era. And honestly, you’re part
of the better film.

PHIL
Yeah, of course. The script was trying to get way too smart
for its own good. And what the hell is the deal with Christian
Bale? “This is my batman suit voice, it’s so different from my
regular voice, you can totally tell I’m overacting.” And what about
having Morgan Freeman and Michael Caine in the same movie.
Casting department of redundancy department, if you ask me.

JACK
(animated)
Yeah! Yeah! And what about Maggie Gyllenhall?

PHIL
(shouting into the kitchen)
Honey, what’d you say about Maggie Gyllenhall?

JEANNIE (O.S)
Daddy wouldn’t throw the veteran’s minimum at her. Looked
like Katie Holmes’ grandmother dipped her face in brine.

JEANNIE (O.S)
It looked like Tyrone Hill’s face threw up on a white guy.

JACK
Thanks, Coach. I’m starting to feel feel better.
I just wish could have made a pencil disappear.

Phil smiles. They hug and he walks Jack to the door.

Luke Walton sits at the kitchen table, fiddling with the red straw in his green tea. He looks tense and bothered. His father walks in from the spacious den, wearing a trademark tye-dye t-shirt and a “world’s coolest dad” hat. He sees his son looking despondent and sits down next to him.

LUKE WALTON
Dad, you ever been in love and didn’t know
what to do about it?

BILL
Luke, when I was a freshman at UCLA, I had
a hard time telling Coach Wooden about my
true feelings for him. But I gathered up my
courage, and we had a nice talk. To this day,
Coach Wooden remains the love of my life.

BILL
Women never made me nervous, son, only Wooden.

BILL
Son, all you have to do is tell a woman how
WONDERFUL she looks; or talk about how
she’s THE GREATEST cook in the world.
Platitudes and shoes are the key to any
woman’s heart. Luckily, I found a woman
that could deftly slip into the hemp-crafted
Teva Sandals that define my soul.

BILL
What’s so intimidating about this Lisa?

LUKE
Well, she’s a better player than me; she’s won
more trophies than me; she gets more credit
for her looks than me; and I think she’s cooler than
me. She might even be taller than me, but we
haven’t stood back to back yet.

BILL
Son, you’re a Walton. Genetically engineered by
the game’s best passing big man, a loving mother and
absurdly high levels of THC, you’re THE GREATEST,
MOST UNIQUE, FANTASTICALLY TREMENDOUS,
young man on the face of the earth. I think this
“Lisa” should be worrying about impressing you.

BILL
You’re a team player with an LA Gear contract! Cooler
than you? I think not!

LUKE
Wow. Thanks dad. I think I feel better.

EXT — Beach in Malibu — The Next Day

Lisa Leslie and Candace Parker walk down the beach, immersed in conversation. A surfer comes running towards them.

SURFER
What up, ya’ll? Ya’ll are hella tall!

SURFER
Listen, my boy is throwing a kegger
tonight in Hollywood if you want to come.

LISA
Uh, no thanks.

SURFER
I was talking to the other one.
CANDACE PARKER
She speaks for both of us, now step off.

SURFER
Damn, what’s with all the hostility?

SURFER
And if I don’t?

LISA
You see the bruises on that chick’s
face from Gossip Girl in US Weekly?

LISA
Well, my girl’s a scrapper. And you don’t
even have fifteen minutes of fame to
necessitate her going easy on you when
beating your ass.

CANDACE
Oh my God, I will smack you so far back
in time you’ll be late for your audition for
Blue Crush.

He walks away quickly down the beach.

LISA
Girl, you are somethin’ else.

CANDACE
Where are all the real men at?

Lamar Odom and Andrew Bynum roll down Sunset Boulevard in Odom’s tricked out whip that rolls on 26 inch chrome.

ANDREW BYNUM
Too much fake, not enough real. I can’t take it.

ODOM
Yeah, nobody’s direct with anybody like back home.

BYNUM
We shouldn’t put up with this.

ODOM
Yeah, we need to represent. From now on,
whenever there’s too much drama goin down,
we’ll squash it.

BYNUM
You just did a Denzel impersonation.

BYNUM
The representation is still Hollywood produced, though.

ODOM
Damn. So there’s no way to escape Hollywood?

BYNUM
I guess not.

They look at each other, pain written across their faces as we fade out.