Biedrins Goes to Work on Comeback 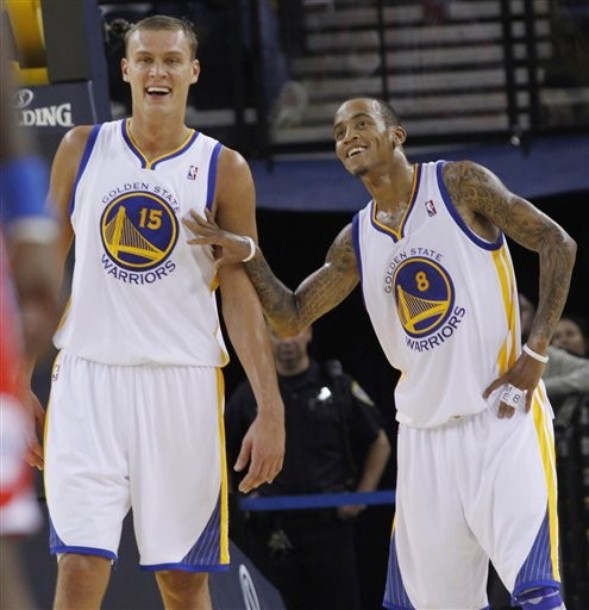 Just as in life, in basketball sometimes all it takes are the right words from the right person at the right time to save your career.

Throughout the first half of the season, the play of Andris Biedrins could best be described as listless. After shooting a horrendous 16 percent from the free throw line last season, the Warriors’ longtime center didn’t seem to want the ball at all, as though he’d get fouled as soon as he touched it — and if he missed his first shot of any game, it was virtually guaranteed he would disappear for the rest of the night. Worse yet, his deep funk on offense was dampening his enthusiasm for rebounding and shot blocking, which had always been his strong suits.

Biedrins, a seven-year veteran at the age of 24, is at the front end of a rich long-term contract that many fans already believe is an untradeable albatross for the Warriors.

One day after practice, assistant coach Rob Werdann, who works primarily with the big men, took him aside for private meeting.

“He told me that this is not going the right away,” Biedrins says, “And I told him that I felt the same way myself.”

While Biedrins refuses to say exactly what was said, Werdann is willing to describe how it was said:

Werdann’s way — or at least his accent — comes from the New York City borough of Queens, where he grew up. He was a prep star under legendary coach Jack Curran at Archbishop Molloy (his teammates there included future NBA star Kenny Anderson), and went on to nearby St. John’s, where he played for Hall of Fame coach Lou Carnesecca. Werdann has the face of a 6’11” choirboy but sounds likeTravis Bickle.

Ask any of the big men he’s mentored, and the phrase “he’s a good guy” always seems to come up. But most also say Werdann can be blunt.

“He treats people like people,” says Emeka Okafor, who played for Werdann last season in New Orleans. “By the same token, if you tick him off, he lets you know, too. He doesn’t get personal, but he’s very direct.”

After their talk, Werdann and Biedrins began putting in extra time together after every practice and on all of the team’s off days. Unlike Warriors games, Werdann is making Biedrins spend most of these workouts with the ball in his hands.

Biedrins says the extra workouts have benefitted him mentally, and have been equally important in helping him regain his touch more quickly as he recovered from a nagging ankle sprain. Werdann sees it differently.

“It was all mental,” Werdann says. “A lot of the time you have to see things happen before they happen. Seeing the ball go through the basket gets you used to it. Then every time you shoot it you expect it to go in.”

Werdann can relate to Biedrins’ problems.

The coach broke into the NBA in 1992 as a second round draft pick by the Denver Nuggets, after having spent most of his final year of college nursing a calf injury. Just a few years removed from being one of the most recruited high school big men in America, he found himself on the end of the bench, and after appearing in only 28 games, was cut.

“I wasn’t sure how to go about things,” he says. “I wasn’t mature enough.”

Like Biedrins, Werdann, in the words of one of his former coaches, needed “the eye of the tiger.” Cerebral and unassuming off the court, he was often unable to muster a mean streak on it. Known more for his court savvy and shooting touch than for athletic ability, Werdann had to make it personal.

After being released by Denver, he discovered his inner toughness, playing anywhere that would take him — from the CBA to Venezuela — and perhaps most importantly, taking up boxing. Which, he points out, improved his footwork and hands as well.

Eventually he made it back to the NBA, for a season and a half with the Nets.

“That’s where I feel like I got my reward,” he says. “It was a short stint, but I accomplished what I set out to do.”

The parallels between Biedrins and Werdann mostly end with their low-key dispositions. The Latvia native has shown flashes of the deft court sense his coach is remembered for, but he is longer and more athletic than Werdann ever was. In body, at least, he’s worth every dime of the contract that pays him $27 million over the next three seasons.

And since Werdann intervened, Biedrins is inching closer towards justifying that amount in terms of his play. He has been much more active on both ends of the floor, and looks increasingly comfortable with the basketball. Coach Keith Smart still pulls Biedrins out of any situation where he might be intentionally fouled, but Biedrins is at least giving the Warriors a solid presence in the paint —helping to spark the team’s strong run over the past few weeks.

But there remains a lot of work to be done before he becomes the double-double player the Warriors thought they were signing. For the foreseeable future, Werdann and Biedrins have no intentions of cutting back on their extra practice time.

“Since the first time we worked out, it was just up,” Biedrins says. “Now we do it every single day, and it’s really working out.”

– Around the NBA, there are many great stories about coaches helping players in their careers. Denver Nuggets guard Anthony Carter recently shared this one with SLAMonline: When Carter was a rookie with the Miami Heat, the team’s assistant coaches set up a non-mandatory training session on an off day. Carter said he would go, but changed his mind and didn’t call the coaches to let them know. Coach Pat Riley came down on Carter: “If you ever do that again, I’m going to cut you,” Carter remembers Riley telling him. “He taught me a lot of my work habits and how to be a professional,” Carter says. “If he hadn’t instilled all that in me my rookie year I probably wouldn’t even still be in the League.” Carter also mentioned that Nuggets Coach George Karl is now letting him sit in on many coaches’ meetings, grooming the 35-year-old for a coaching position once his career is over.

– You might have noticed the Warriors’ Reggie Williams and Stephen Curry doing a strange fist pump in front of their faces after big shots. The celebration was inspired by a rap song called “Faceguard,” which the two listened to heavily last season. But Williams says it would be difficult to find “Faceguard” on the web. “Googling it probably won’t work,” he says. “We bought it off some dude at the mall.”

– Some observers have questioned Coach Keith Smart’s decision to make Dorell Wright, the team’s best three point shooter, the inbounder on out of bounds plays, even in situations calling for a quick shot. But Wright is purely a standup shooter, and struggles when shooting off the dribble or running off screens — something the team would like to help him change.

– Before the Warriors’ recent upset win over the Chicago Bulls, Smart made a lengthy “lowlight” reel of the team’s blowout loss to Chicago earlier in the season — and made his players watch it three days in a row, including the morning of the game. “We came out really angry because we watched that film,” said Biedrins afterwards.

– Vlad Radmanovic may be 6’10”, but the versatile forward works out with the Warriors’ perimeter players when the team breaks into groups.