Big Macs, Britney and the Braves 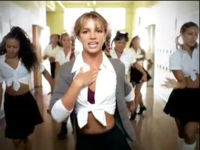 We’re going to start today by talking about baseball. As I wrote the other day, I went ahead and shut it down for the rest of the NBA season. Seeing as how I already have a confirmed Playoff spot, I really don’t want to risk a freaky late-season injury or even fatigue, which could happen rather easily with some of these crazy games that are being played right now. All the young bucks are out there running wild, trying to make a name for themselves. I just want to make it to the postseason without any sprains or strains so I can give it my all.

Check out some of the box scores from last night: Bobby Jones started for the Sixers (no, not that Bobby Jones); David Noel played 35 minutes for Milwaukee; Kevin Willis got 4 minutes for the Mavs; Linkstigator Pat Burke even got off the bench in Phoenix.

These are strange days in the NBA. So I’m just going to let everyone play out the string.

(But don’t think I’m not noticing what the Nuggets are up to. Makes our AI cover seem like we knew what we were doing or something.)

During my self-imposed hoops sabbatical, I’ve turned to two things for mental stimulation: movies and baseball. (There’s actually one other thing, too, but I shouldn’t write about that here.) I’ve likely watched more movies on cable in the last two weeks than I’ve seen all year combined. Last night I watched the great Fresh for the first time in about ten years. I’d forgotten what a great film that was. I knew the kid had something up his sleeve but I couldn’t recall the particulars until I watched it again last night. I also watched parts of Inside Man in HD, which is also a good film despite having a lot of holes. And then it ends with that weird twist that makes no sense at all. But I like that the weird bank chairman guy with the porn mustache is the father of the Von Trapp family.

But mostly I love that my favorite team, the Atlanta Braves, have the best record in baseball right now. We haven’t had to play the toughest schedule — the Phillies, the Mets and the Nationals — but we’ve won every game except one. Sam keeps ranting and raving about the Mariners/Sox last night, but I don’t care about the AL right now. I just want to watch the best team in baseball. The Braves. My Braves. And after the hell I’ve been through with the Hawks this year, I think I’ve earned that right.

The Braves have a really weird team this season. My favorite player might be second baseman Kelly Johnson. He’d never played second base or hit leadoff in his life before this season started, and now he’s starting at both for the best team in the majors; that’s like the Lakers deciding to make Luke Walton their starting two guard. Johnson has been fine defensively at second, and he might have the best eye of any Braves hitter over the last five years. The funny thing is he’s batting .179 right now, which sounds horrible, but he rarely strikes out, he’s great at drawing walks and he’s been hitting the ball hard. Also, he looks like a kid who was expelled from a prep school for smoking weed in a hallway.

And finally, the Braves have a bullpen. Mike Gonzalez is all jittery and pitches with a flourish, like a bullfighter. Rafael Soriano had been unhittable until last night, when he came in during a blowout and didn’t know what to do. And our closer, Bob Wickman, is, to be blunt, obese. It’s not like being really fat helps him throw hard or anything, because he rarely cracks 90 mph. But he’s big and he’s out there, so deal with it.

Meant to get all this stuff posted earlier but got stuck in a meeting all afternoon. A few links…

• Loved the quote from the Rev. Dr. Isiah Thomas in today’s Times after a reporter asked him if the Knicks had relaxed after they saved his job: “I’m pretty secure in who I am, and I’ve done all right in my life, so I don’t need people saving me. But thank you.”

• The DC Sports Blog points out that the Wizards have been in a free-fall since they let go of James Lang. I really hope the Wiz re-sign Lang so I can get a “Lang — 54” jersey, since I wore number 54 for three years in high school. We’ve got your back on this, Steinberg.

• There’s a bit of a fast-food brouhaha erupting after the Knicks got mad at the Bulls for scoring late in a blowout the other night. The Bulls weren’t just running up the score, they were trying to win Big Macs for all the fans in the arena.

And now David Stern, the King Solomon of controversy, is weighing in on it.

Sayeth the Sternbot: “It’s been a subject for about 20 years, as I can recall. It used to be about fries. Now it’s about the whole Mac. I’m not going to have an opinion, other than to say it’s here and there are no rules against it and our players shouldn’t complain about it.”

“I don’t care about the Big Macs,” Francis said. “I’m just saying respect, man. Their coach played in the NBA, so he should know that. If somebody did that to him, I’m pretty sure he would be upset.”

I wonder if Scott Skiles would be upset if a player signed a huge contract and then had all sorts of uncorroborated knee problems and some nights just didn’t come to play?

• Luke Walton says he doesn’t even know a Britney. Sure.

• Slam editor-in-chief (and George Washington grad and New York Giants fan) Ben Osborne says this could be the culmination of his life’s dreams.

• And finally, congrats to Adrian Dantley for finally getting his jersey retired by the Jazz. Long overdue.