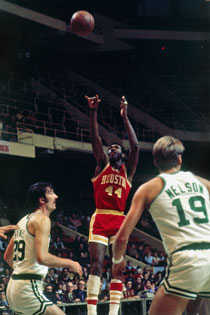 Recently on the Mike and Mike in the Morning show on ESPN, the cohosts started a short, but spirited discussion about the lack of quality big men in the NBA today. The Mikes discussed the reasons for this dearth, and among the reasons mentioned, not surprisingly, was the changing way 4s and 5s now play the game.

In their view, most of the bigs now coming into the League want to be Kevin Garnett and run the floor, not be contained in the paint. Moreover, the Mikes correctly pointed out that the influx of European big guys into the League over the past two decades has played a role too, because many young players now want to emulate the Euros, play the international style, and stay outside and hoist up long Js. In this regard, M & M referenced Dirk Nowitzki as Role Model A.

The Mikes moved on to other matters, but the discussion got me thinking about the subject they raised—in the context of the history of the NBA. One operating assumption of the Mikes—and a lot of younger fans, I’d guess—seems to be that NBA bigs were virtually imprisoned on the low blocks until the last decade or two when they were liberated, for better or worse, by great athletes like Kevin Garnett and by the influx of outside-shooting Euros. Voilà—welcome to the brave new world of Andrea Bargnani, Rashard Lewis, Mehmet Okur, Troy Murphy, Brad Miller, Charlie Villanueva, Ryan Anderson and Channing Frye. Not to mention Carmelo Anthony, who is now playing the 4, and “small” forward Kevin Durant, who is at least 6-9.

Over the last few years a number of articles have appeared in which various and sundry sports writers and fans have weighed in on the best shooting big men “in NBA history.” Usually, such lists consist largely of active players. One reason for the presentist bias is that the three-point shot, often used as a proxy for good outside shooting, is a relatively recent innovation when considered in the grand sweep of professional basketball history. It was instituted in the ABA in ‘67-68, but was not instituted in the NBA until ‘79-80. Another reason grows out of the fact that good stats on outside shooting for earlier decades are hard to find, making judgment calls necessary in assessing which big men could—and could not—fill it up from outside. These problems haven’t kept all of the great-shooting big men from earlier decades off of such lists. Most writers on the topic include some combination of the following 15 retired bigs in their rankings, albeit in different order:

One can certainly quibble here and there: Some of these guys were excellent mid-range shooters, but didn’t shoot a lot of threes, and others, like Kevin McHale, didn’t become formidable three-point threats until late in their careers (McHale hit 15 of 37 attempts in ‘90-91, for example). In any case, I’m not writing to vote any of these guys off of the island, but to fill in some of the gaps in the historical record for younger fans. With this in mind, I’ve come up with a quick list of 33 other good-shooting bigs from yesteryear, more than half of whom have been retired 20 years or more. Some of these guys couldn’t do much else—Mel Counts comes immediately to mind in this regard—but they all were considered good shooters in their time. Here goes:

The list is drawn from people who played what we now call the 5 position or the 4 position (at least nominally). Remember, though, that the two forward positions were much more loosely defined in earlier eras than they are today. Note, too, that this list extends, but hardly exhausts the roster of good-shooting “big” men in the history of the NBA, players who in the 1950s and 1960s often measured in at 6-5 or 6-6. The main take away, then, is that some big guys could always operate effectively outside of the paint. Let’s hear more from fans, particularly from the oldies in the crowd.

Peter A. Coclanis is Albert R. Newsome Distinguished Professor of History, and Director of the Global Research Institute at the University of North Carolina-Chapel Hill.