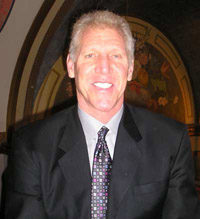 Interviewing Bill Walton is the easiest thing in the world. It doesn’t actually involve much interviewing. You throw out a few words, or an idea, and he’ll happily take it from there. And where he takes it is anyone’s guess—he moves quickly and with ease from specific aspects of basketball to general life lessons. Earlier today, Walton sat in front of a group of bloggers and journalists at Legends Bar in midtown Manhattan and talked about college hoops, the NBA, his upbringing, Coach John Wooden, and much more. Promoting Guinness beer, he told everyone to “Go bold, quit your job, and chase your dreams,” numerous times, and provided a wide variety of other highlights. Note that the italics below are an attempt to put his quotes into context, but given his verbal acrobatics, that’s damn near impossible. With Bill Walton—the man who once compared Boris Diaw to Beethoven himself—context rarely holds much weight.

On what he enjoys about college basketball:

“My favorite player and my favorite story in college basketball this year is Jimmer Fredette, who I just think is fantastic. He’s a combination of Pete Maravich, Larry Bird, Danny Ainge and JJ Barea. Just exemplifies everything you look for in a player. And what makes it so much fun for me is he’s a little, skinny, scrawny guy, which is what I used to be. That was me growing up as a young boy, idolizing UCLA basketball with the first championship teams, with [Walt] Hazzard and [Gail] Goodrich and Keith Erickson and Kenny Washington and Freddie Goss—the speed, the quickness, the change of pace and execution and fundamentals—he’s got it all. Our world has become one of power, of size, of strength, with nothing but the winners of the genetic lottery. And there’s little Jimmer Fredette, out there just torching them all. And there’s nothing on Earth like beating the big guys, and when you come out and you look at those big, giant guys and you just go, OK. My mind, my spirit, my soul—it’s just all happening.”

On expanding the field to 68:

“More basketball! It means more money. More money, means more opportunities for other students, other sports, and the NCAA—I’m a big believer. I don’t think you should pay players; I think that’s a mistake. The value of a college scholarship—anybody in this room go to college? [Hands raise] Anybody in this room think this was a valuable experience and it helped you with your life? [Hands raise] Yes, so that’s the value that you get. It’s not about paying them money. Give value, but make the value be realistic. And have exceptions. Have exceptions for extreme cases. And make it worthwhile for the players to stay. The Player’s Association [and] the current players are making a huge mistake arguing for high school players to come into the League. The Union represents current players, and those jobs at the end of the line. That’s what the Union should be fighting for, as opposed to the guys who aren’t even in the Union. I’m for a rule that would have three years out of high school, or 21 years of age. Three years, or minimum 21 years of age. The NBA, that’s a man’s League. It’s adults. College is different; two totally different sports. And fantastic, unique and great in their respective ways.”

“I didn’t grow up with a silver spoon, but I grew up with a golden dream. A golden dream of being part of something special. And I had remarkable parents, [with] no clue about the world of athletics. Never shot a basket with my dad. Saw him run one time at the church picnic and fell over laughing. My parents, ask me to this day, ‘Bill, you graduated from UCLA 37 years ago, did you ever get a job?’ I’m closer than ever to being able to say yes.”

On the best teams he’s played for:

“I was a part of three of the great teams in the history of basketball: The UCLA Bruins, whose record still stands to this very day; The Portland Trail Blazers, where I played my best, and we became the youngest team in the history of the NBA to ever win the championship; and then the Boston Celtics, my boyhood dream team. I grew up in Laker country; San Diego, that is Laker country. [Radio sportscaster] Chick Hearn was the man that taught me how to think about basketball, how to play basketball, how to love basketball, how to love life. But the way Chick talked about Bill Russell–because we didn’t have a television growing up. We couldn’t afford one at the beginning, and then our mom, who was the town librarian, one day she crushed our spirits. We would relentlessly pester our parents, like, ‘Buy us a TV! We want to be cool!’ And they said, ‘You want to eat, or you want to watch TV?’ We wanted to eat. So finally one day at the dinner table, my mom said, ‘We saved enough money, we can afford a television.’ ‘Yes! We’re gonna be cool!’ And then she said, in her next breath, ‘But I’ve been doing lots of research at the library, and there’s nothing on television worth watching, so we’re not gonna get one.’ But I had the radio, and I had Chick. And the way Chick talked about Bill Russell, that’s how I fell in love with Bill Russell. The way he carried himself, the way he did everything that others couldn’t or wouldn’t do. Bill Russell was one of those supremely unique characters and personalities and talents who could and did do anything that he wanted to do, but his choices in life were to make a difference for other people. His combination of Red Auerbach and that whole Celtic thing, that was me—little Billy. And I got to be a Celtic. And now I’m here in an Irish sports bar, with Guinness.”

On the best teams in the NBA:

“The Lakers are on top right now. The Celtics are the best team in the East, but they’re being pushed by Chicago and Miami. And the dream for those teams right now, who don’t have as much talent as Boston, the dream for Chicago and Miami: The Celtics are old. Run ’em. Just keep running, keep playing; they’ll break. They’ll wear down under the endless nature of NBA basketball. Dallas and San Antonio are good, but they’re not as good as the Lakers. The Lakers will have an easier time getting to the Finals than the Celtics will. Whoever has home court between Lakers and Celtics in the Finals will win. The Celtics just a week ago had a five-game cushion. That cushion is down to two, and shrinking fast, with losses to teams like the Clippers, Philadelphia, and the New Jersey Nets. With all being said about Boston, I don’t think they should fire their coach. I think he’s a keeper.”

On if playing in the NBA is fun during March:

“The only time playing basketball is not fun, the only time it’s not better than perfect, is when you’re hurt. I know far too much about that. I have one skill at life and that’s being places where I don’t belong. Although I’m in an Irish sports bar with Guinness, so…I’m a slow learner, but I may be getting closer to the Promised Land.”

On why the fast break is his favorite play:

“I used to play like Danny Ainge when I was a young player. When I was 12, I was playing against some really old guys—they were 30, maybe even a couple years older. I was torching them, and they got mad. They took me down in a high-low. Bam. I tore my knee up, and I couldn’t play. The doctor didn’t know what to do, so he said to go home, get some rest. I went home and rested, and it didn’t get better. He had to operate. The operator said, ‘I don’t know, Bill. Just go home and lie for three months, and let’s see. Let’s hope for the best.’ So by now I’m 13, I lie in bed for three months, have the operation. I get up, I’m six and a half inches taller, but only gained five pounds. Couldn’t run, because of my knee. And my game changed totally. So I convinced the coach—I’m in high school now—just let me play defense. Let me stay on the defensive end. I’ll block shots, I’ll rebound, I’ll outlet the ball, and when we get the ball, our other four guys would just race down the floor and shoot. That’s how I learned how to start the fast break, and to the very end, it remains my favorite part of basketball. Whether it’s a deflection, intimidating a shot, blocking a shot, grabbing a rebound, it makes no difference. Just start the fast break.”

On arguing with Coach Wooden:

“Coach Wooden may not have liked the give and take, because it was his team, and we were gonna do things his way. We were ‘more than welcome to go do something else.’ He would always say, ‘Bill, we enjoyed having you here, but we’re gonna miss you.’ And while I fought Coach on every issue—you name it: politics, religion, social issues, the war, economics, whether the cheerleaders should be in our hotel after the game—he always said, ‘Bill, I’m the coach, and I’m in charge. We’ve enjoyed having you, but we’re gonna miss you.’ And they asked him, when he was 97, they said, ‘So coach, come on, you’re 97. Were you really gonna kick Walton off the team?’ And without hesitation he said, ‘The only thing that matters is that Walton thought I was going to.’ And I did!”

On his tourney favorite:

“Too early for me to tell. There’s no dominant team, there’s no great team. [Someone asks about Ohio State.] Ohio State’s good. I’m not the biggest fan of Big Ten basketball. I like faster-paced basketball. Mike D’Antoni, let’s give him all the credit in the world for saving basketball. When it was 71-69 at the end of the third overtime, ‘OK guys, when are we gonna get running? When are we gonna get shooting?’ … As the tournament unfolds, I’ll be able to see all the teams.”