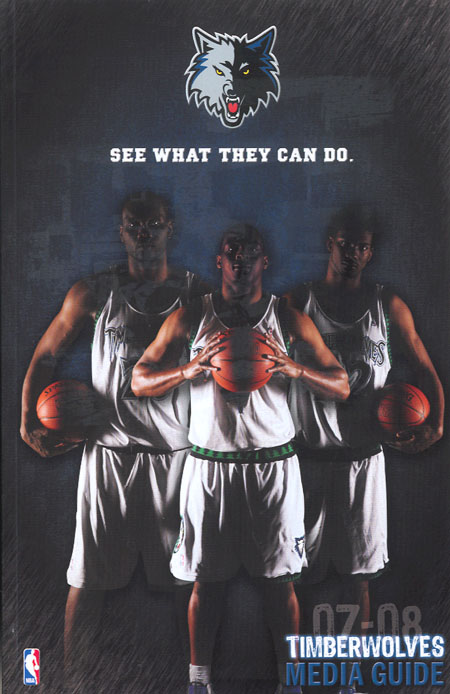 Last year at this time, when the NBA media guides arrived at the office, former E-I-C Ryan Jones took some time out of his day to go through every single last one and give a critique. We never knew Ryan had that much time on his hands, and it was as they say, a harbinger of things to come. But that was last year. I’m here to give the raw visuals of comedy, strictly looking at covers. I scan for your pleasure.

Most media guides are safely generic, a few of the best players on the team, maybe a commemorative look back for the 60th anniversary or something, perhaps an inspiring slogan. Then there are two teams that stuck out, ones that make you say… I don’t know it’s up to you.

First up is the Memphis Grizzlies:

Don’t adjust your monitors. That’s not a scratchy image, it’s supposed to look drawn like that. I dressed up as a pirate for Halloween, but maybe I was just being Pau Gasol.

And your second image, once again they chose the lighting, this was not tampered with and the scanner was pretty accurate:

That’s right! It’s three Timberwolves players lurking in the shadows with the ever-so-promising slogan “See What They Can Do.” They can lose 60 games. You can see it. And as an organization just said goodbye to its heart and soul, the one man that’s not around that will overshadow everything they do this year, they chose to put their three players in heavy shadow. Maybe it means they begin in shadow, and they will emerge from it as the season goes on, and this is just so artistic.
Either way. Enjoy!