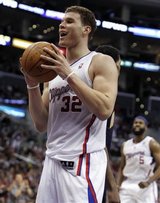 NBA players are large, prideful men. No one likes to get shown up, especially not in front of 20,000 people, and certainly not by some rookie.

Unfortunately for the poor souls who must contend with Blake Griffin on a nightly basis, getting publicly humiliated by a rookie is something you just have to accept.

Griffin lit up the Indiana Pacers for a season-high 47 points and ripped down 14 boards yesterday. There are no statistics for punking defenders, but needless to say, no one on the Pacers’ roster was smiling or particularly happy with Blake following the game. The young man understands the salty feelings, but he doesn’t care (no should he.)

FanHouse has the quotes:

James Posey took the baton from Lamar Odom, who had sparked a physical round of do-si-do and four ejections on Sunday after taking exception to Griffin’s fight-to-the-finish exuberance. Posey was assigned to guard Griffin late, then grew frustrated when his presence had no positive effect.

The two players had one tense exchange in the third quarter, when Posey appeared to get hit by a Griffin body part and showed his disapproval by puffing his chest and circling Griffin before he went to the line. By the time Griffin had closed strong in the win, and Posey nor any other Pacers players could do anything to stop him, the animosity remained after the buzzer sounded.

Griffin walked some 15 feet out of his way to offer Posey a conciliatory fist-pound, only to see the 13-year veteran shrug him off and walk the other way. Griffin smirked, then stared at the back of Posey’s jersey as they went their separate ways. “Yeah, I’ve got a thing for rubbing people the wrong way I guess,” Griffin said. “I didn’t think we got into it. I know he came in to guard me, so I don’t know. Sometimes you’re frustrated after games like that. Maybe next time he’ll give me a high-five.”

Veteran NBA defenders are going to learn sooner or later to get over their petty beefs with Blake Griffin. It’s not like they can challenge him physically.

No Country for Old Men and all that.