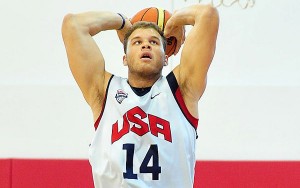 The news went from bad to worse for Blake Griffin and Team USA yesterday.

The LA Clippers’ star forward left Vegas with a medial meniscus tear of his left knee, for which he will undergo surgery, and won’t play for the United States in the Olympic Games.

But it’s not all bad. Doctors expect Griffin to be ready for training camp.

Blake Griffin has been diagnosed with a meniscus tear in his left  knee and will have arthroscopic surgery probably early next week, according to NBA executives who were not authorized to speak publicly on the matter. Griffin will not be playing for the U.S. Olympic team in London later this month, but he will be available for Clippers training camp that starts in October.

Griffin is expected to be out about eight weeks recovering from the injury and should be fine and ready to play when the season starts, the executives said.

This is obviously terrible news for all parties involved, but the Clippers have to be feeling a sense of relief since the tear is considered small, and Blake Griffin is expected to recover in time for next season.

Here are head coach Vinny Del Negro’s thoughts on the injury: “We’re relieved that this does not affect Blake’s ability to be ready in time for training camp,” said Clippers’ Head Coach Vinny Del Negro. “Missing out on the Olympic experience will be tough for him to take. I know how dedicated he was to doing that. We’re glad we can get this fixed now and take advantage of the available time for him to fully recover.”