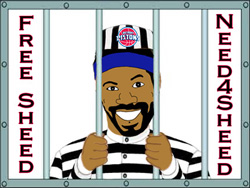 I haven’t done a good ‘ol fashioned blog link party in a minute, so here we go.

Need4Sheed as started a petition to save Rasheed from the newly enforced old rules. The Nugg Doctor supports this petition, probably because of what happened to Carmelo last night. Clipperblog didn’t mind.

Perkisabeast is not handling the Celtics opening loss very well.

Sactown Royalty points out that Mo Taylor was ejected with a double T as well. It’s not just the stars.

I meant to link to this much earlier in the week, but Hoopsaddict has launched their magazine. You can check it out by clicking here. Welcome to da party, pal! (That’s a line from Die Hard.)

Pounding the Rock on how the Spurs turned the game around in the second half last night.

This is the best NY Knicks writer by far.

Ron Artest was on AOL Sportsbloggers live. Yes, he raps. In other Ron news, Being Ron Artest takes exception to our low ranking of Ron in the top 50. It’s like I said in the write-up, he’s totally unpredictable.

We’re still waiting to hear from our alleged fantasy basketball expert, so for now here’s someone else that gave out fantasy awards.

Finally, there were approx. 20 billion NBA previews written this year. This one is from straight bangin’, a blog I read more for music opinion than sports stuff, but the NBA writing is just as good. Here’s part 1 of the preview, and here’s part 2. Thorough.
All right, lunchtime!