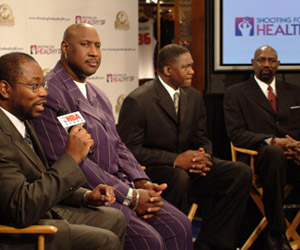 For the last couple of weeks this persistent publicist (are there any other kind?) was harassing SLAM Managing Editor Susan Price and I about an event called “Shooting for Healthy BP,” designed to increase awareness of high blood pressure. SLAM is certainly not a fan of high blood pressure (a legitimate threat when we’re closing an issue, to be honest), but we don’t have a “health” section. We’ve also done nice coverage in the past on all three of the campaigns spokesmen: Darryl Dawkins, Spencer Haywood and Dominique Wilkins. Sounded like a no go. But then I remembered my need to file this little column, so I sent in a belated RSVP and headed up to the NBA Store at noon today. Here are some notes…

Based on the literature being handed out, I learn that this campaign, sponsored by the drug maker Novartis and the NBA Retired Players Association, is coinciding with a website launch today. The website is shootingforhealthybp.com, and please check it out if you want more info. Some of the basic facts about high blood pressure can be found on the site’s home page and they’re not pretty: 72 million Americans suffer from high blood pressure, and a disproportionate number of them are black. For any number of reasons I hope this condition doesn’t afflict too many people who read slamonline, but you all may know someone who is at risk, and maybe the above site can help you out.

It’s 12:20, 20 minutes past when this thing is supposed to start, and not much is doing besides a lot of cameramen setting up. The slow start makes the song that is being pumped through the NBA Store’s speakers—“Let’s Get it Started,” surely in regular rotation in all NBA-owned businesses—a bit ironic.

By 12:25 or so, though, everyone has suddenly shown up and taken their places. The panel, comprised of the aforementioned ex-NBAers and Dr. Wallace Johnson, is introduced by Len Elmore. Apparently, besides practicing law and working as the best college basketball analyst on TV (in my opinion), Mr. Elmore serves as the president of the Retired Players Association. In Elmore’s words, the basic premise of the event is “to use these players to reach the larger community about controlling high BP,” adding that “these legends are here today to stand for all retired legends.”

And don’t snicker; you obviously know Nique, but Haywood (four-time NBA All-Star) and Dawkins (nine straight double-digit scoring seasons from ’78-86) were both fine players too, the latter most notable for his named dunks. Anyway, after the Doc says a few words (main point: “It’s better to have a healthy fear of high blood pressure than a healthy fear of medication.” Obviously these guys are here on a drug company’s dime, but their point is well taken.), Chocolate Thunder is the first on the mic. Wearing an unbelievable purple pinstriped suit that would have looked great at an NBA Draft in the mid-90’s, Dawkins spoke about how he went to three doctors before admitting that he had high blood pressure. Once he did, he started treatment and says he feels much better. When he’s done, he turns to Nique; “I’m gonna’ pass the mic to Dominique, even though I know he won’t pass it back.”

Having seen Nique last year at the Final Four when he got admitted to the Basketball Hall of Fame, I can say that he looks good. He doesn’t talk about it directly today, but this is a dude that ballooned in weight after he first retired, which surely didn’t help his blood pressure. His personal story involves watching his mother suffer from the effects of high blood pressure and how that affected him. Nique also names the drug that he takes for high BP, and when he does, it comes out like, “Latrell.” So it comes out, like “once I got Latrell I started feeling better.”

Just imagine the irony if you’re an NBA coach or GM who goes to the doctor and is told, “coach, what you need in your life is Latrell.” They’d probably keel over on the spot with images of Sprewell choking them. Of course, I’m uneducated on medication, and by the end of the session I learn that the drug is spelled LOTREL. Still, I chuckle to myself.

Haywood’s next, and he has the roughest personal history; his father died of a heart attack and he’s lost four siblings to heart disease. Even with that knowledge, as a former world-class athlete, he thought he had nothing to worry about. But eventually he “got out of denial,” and is a contented and healthy person who is successfully coping with high BP. “High Blood Pressure is not a death sentence or something to be ashamed of,” Haywood says. “I’m a perfect example of how good treatment can be for you.”

After the panel finished talking, each member was available for one-on-ones. I built with Elmore for a minute, grabbed a free lunch and was out of there by 1:30, definitely more aware of the frequency with which people develop high blood pressure, and even more definitely impressed with these ex-players’ efforts to do something about it.

One side note for those hearty souls who have read my previous entries and might be curious what became of my fantasy idea…well, we’ve recruited a new fantasy blogger who will be debuting after the All-Star Break, so be sure to check for him.

Assuming I survive LV I’ll be posting some over the weekend and then I’ll be back in this space next Tuesday.