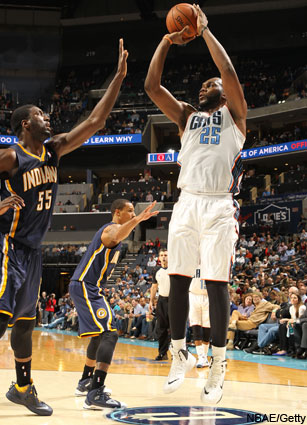 Say what you want about the Bobcats – they have gotten torched for 60-plus by two individuals this season – but Steve Clifford’s team can shut an opponent down. They did just that against the Pacers, smothering the East’s top team all game. Charlotte held the Pacers to a measly 8 points in the first quarter, Indy’s lowest first quarter output of the season, and 41 percent shooting on the evening. Al Jefferson was Charlotte’s rock on offense, as he has been all year, throwing up 34 points and grabbing 8 rebounds, even banking in a 3-pointer for the exclamation point. Big Al has been roasting defenders lately, averaging 32 points while shooting a ho-hum 60 percent over the past four games. Kemba Walker chipped in 19 points and 9 assists for the Bobcats, who have navigated a tough five-game stretch against five of the League’s top teams at 2-3.

Paul George had his worst game of the season for Indy, going 0-9 from the field and scoring just 2 points while clocking out at minus-38 in his 34 minutes. The lone positive on the court for the Pacers was the play of Evan Turner (22 points 9-12 shooting), who had his best game since coming over from Philadelphia in some extended garbage time. One other bit of good news: the Pacers clinched a Playoff berth when Detroit lost later in the evening.

Dwight Howard heard the boos as Orlando welcomed him back not-so-graciously, but he’ll have to settle for a win instead of cheers in his old hometown. James Harden poured in 31 points for Houston, 25 of them after halftime. He continued a run of hot play; he’s averaging 28 points since the All-Star break, helping the West’s hottest squad go 6-2 in that stretch. Howard had 19 points and snared 13 rebounds, hitting 8-12 from the field to help pace Houston, who dug out of a 14-point deficit in the first half. Chandler Parsons went for 19, while Terrence Jones put up 17 and 11.

Nikola Vucevic went right at Dwight in a matchup against the man he replaced, registering 15 points (7-9 shooting) and 10 boards. He was limited by foul trouble – no surprise against Howard – playing just 32 minutes despite his hot hand. Arron Afflalo was the high man for Orlando with 18.

Washington jumped out to an early lead and held on all the way, scorching the Jazz at home. Trevor Ariza, whose shooting has been a pleasant surprise for the Wizards, led the pack with 26 points, knocking down 4-6 from long range. A career 35 percent shooter from 3-point land, Ariza is knocking them down at a 42.7 percent clip this season, by far the highest of his career. John Wall had a double double with 14 points and 10 assists, while Bradley Beal had 22 points on 9-19 shooting. Washington connected on 55 percent of its field goals on the night.

The Jazz got 19 points off the bench from an aggressive Alec Burks, who knocked down 2-3 triples and 6-11 overall. Trey Burke dropped 14 and Gordon Hayward had 12, but both struggled shooting the ball (5-14 and 5-12, respectively). The Jazz starters as a whole shot under 40 percent.

The Warriors showed no ill effects of their Tuesday night battle with Indiana, smoking the Celtics like a Red Auerbach victory cigar in the Garden. David Lee and Klay Thompson both netted 18 points as the Warriors coasted, finishing up a road swing through the East at 4-2. Golden State led by 10 points within the first six minutes, jumping out to a 12-2 lead and never relenting. They led by 20 or more for the entire second half. Steph Curry hit 6-10 shots for his 14 points, getting to rest early and playing just 22 minutes.

The Celtics played sloppily from the start, turning the ball over 15 times in the first half and 22 times for the game. at one point in the third quarter, they had as many turnovers as made field goals. That’s not a good way to win basketball games. Rookie Kelly Olynyk scored 19 to lead Boston, losers of seven of their past eight games.

Don’t look now, but the Nets just might be good. Brooklyn climbed over .500 for the first time all season, giving the Grizzlies a beatdown in Brooklyn. They’re looking like a tough matchup come spring, as they’ve made their way up to the 6-spot in the East. The Nets’ weird length bothered Memphis all night, as Brooklyn had 14 steals on the night; it was their fourth straight game with 12 or more. Joe Johnson put up 21 for Brooklyn, while Marcus Thornton scored 20 off the bench and Andray Blatche added another 12.

Playing without Zach Randolph, a late scratch with illness, Marc Gasol was the only Grizzlies starter to do anything. Gasol had 18 points, which was 12 more than the rest of the Memphis starters combined. Five Grizzlies scored in double figures off the bench, including 19 from Jon Leuer, but the turnovers crippled Memphis.

The Bulls pushed past the Pistons, watching Detroit have a meltdown before halftime and then blowing them out in the fourth quarter. D.J. Augustin put up 26 points off the bench, while Sixth Man of the Year candidate Taj Gibson put in 22. Joakim Noah was once again the story, as he continues to do everything for a Bulls team that has no quit. If he hasn’t made his way onto your MVP ballot yet, it’s about time you added him. The center recorded his second triple double in three games, putting up 10 points, 10 rebounds and 11 assists. Noah is pulling off the rare feat of leading the Bulls in total rebounds and total assists. Chicago shot a season-best 53.8 percent on the night.

Detroit led throughout the first half, but started to fall apart when Josh Smith and coach John Loyer were called for techs five minutes apart. Things remained close until the fourth quarter started; Chicago won the final frame by 10. Greg Monroe put up 27 points for the Pistons, while Smith had 15 points, 9 rebounds and 5 assists.

The Kings got their long road trip started on the right note, crushing the Bucks in Milwaukee. Isaiah Thomas piloted an efficient effort by the Kings, dropping 25 points (9-16 shooting) and handing out 6 helpers. Rudy Gay followed suit, going for 22 points (8-16 from the field) while picking up 7 rebounds and 6 dimes, while DeMarcus Cousins (7-14) had 21, 10 and 5. Overall, Sacramento shot over 52 percent on the night.

Milwaukee wasn’t far behind offensively, putting up and offensive rating of 112, but obviously the Bucks don’t have the scoring muscle to hang with any team that gets hot. Brandon Knight held his own against Thomas, putting up an identical 25-6 line, getting to the free throw line often and hitting 9-10. Jeff Adrien had 15 off the bench.

The Knicks snapped their seven-game skid, pulling away from the Timberwolves late after leading from the opening tip. Carmelo Anthony put up 33 for the Knicks, who got their first win since Feb. 19. Tyson Chandler had 15 points and snagged 14 rebounds (and licked a shot at Kevin Love), while Raymond Felton hit for 18 points and dished 8 assists. All five New York starters made it to double figures in the scoring column, including Amar’e Stoudemire in just his third start of the season.

The Timberwolves missed a critical opportunity to make up ground in the Playoff chase they so desperately want to be a part of, as the two teams they’re chasing both dropped games on Wednesday. After a 4-1 road trip got them over .500, they were looking at a chance to put together a real run as they started a four-game homestand. Instead, they watched the Knicks start the game 8-10 from the field and never were able to overcome the early deficit. Kevin Love led the Wolves with 19 points, but struggled shooting the ball (6-17 overall, 3-10 from 3-point range). Ricky Rubio had 11 points, 6 rebounds and 8 assists, but also committed 6 turnovers, while Kevin Martin bricked his way to 12 points on 3-10 shooting.

Denver finally showed signs of life, snapping a six-game skid and beating the Mavericks in a game nowhere near as close as the final deficit. The Nuggets led by 17 in the first quarter, holding the lead for the final 46 minutes of the game. The Mavs offered no resistance defensively, as the Nuggets got to the free throw line at will (30-36 as a team) and had six players score in double figures. Ty Lawson had 20 points, 7 assists and 6 rebounds in his second game back from his rib injury. Wilson Chandler netted 21, while J.J. Hickson had 20 points on 8-10 shooting off the bench.

The Mavericks’ starters came out flat, something Rick Carlisle admitted to reporters after the game that he should have recognized much sooner. While Dallas cut the lead to single digits a few times throughout the game, they never made a real threat at taking the lead. Despite the wipeout, Dirk Nowitzki was able to hang with the up-and-down nature of the game to score 27 points on 13-20 shooting, while Brandan Wright hit for 19 points on 9-13 shooting off the pine. Dallas missed a chance to give themselves some breathing room in the Playoff race, as the Grizzlies lost as well. The Mavs hold a one-game lead over Memphis for the 8-seed.

It looks like things are back to business as usual in Portland. The Blazers have shaken off whatever was plaguing them in their run of mediocrity, as they drained 13 triples against Atlanta in an easy win. All five starters scored between 10 and 14 points, with Nicolas Batum putting up 14 and snaring a career-high 18 rebounds, his third straight game with 15 or more board.. The one fly in the ointment was LaMarcus Aldridge, who shot just 1-13 in his third game back from a groin injury. His presence in the mid-post certainly helped matters, as the Blazers shot 45 percent from deep with the offense revolving around him. Mo Williams pitched in 15 off the bench as the high scorer.

On the other side – poor Atlanta. In their recent injury-fueled tailspin, the only thing that has kept the team from being a total punchline was Kyle Korver’s run of consecutive games with a 3-pointer. No more, though, as the streak came to a halt at 127, with KK going 0-5 from deep. Wes Matthews (10 points) blanketed the sharpshooter all game, and he told the press after that he made it his mission to make sure Korver didn’t touch the ball. Korver got some looks, but they were rarely good ones. Cartier Martin scored 16 off the bench to lead the Hawks, who look more and more like they might fall out of the Playoffs. They’ve won just one of their past 13 games, and 12 of their final 23 games come against current Playoff teams.