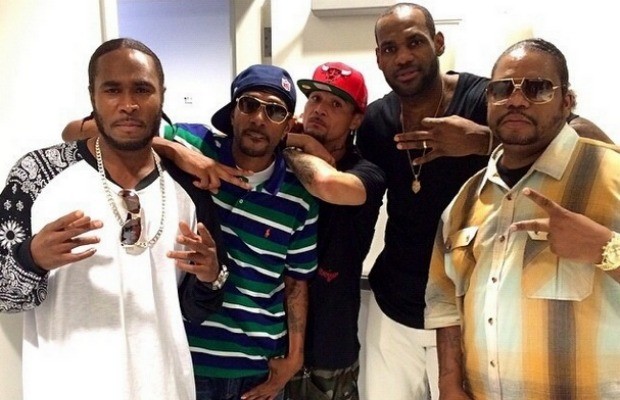 People from coast-to-coast knew Cleveland because of Bone Thugs-N-Harmony. During the pinnacle of the Cleveland-based group’s Grammy-winning, platinum-selling career, everyone knew Bone and the city they represent. The success and notoriety they achieved with hits like “Tha Crossroads”, “1st of Tha Month” and others, also offered reason for hope and pride to a community that hasn’t cheered a professional sports championship since 1964.

As the group’s legion of loyal fans matured, Northeast Ohio soon ushered in its next great reason to believe. This time, he was a basketball-playing prodigy from St. Vincent / St. Mary High School—roughly 45 minutes from the intersection Krayzie, Layzie, Wish, Bizzy and Flesh called home. He’d soon break into the NBA as the League’s Rookie of the Year before winning multiple MVPs and NBA Championships.

Just as LeBron James grew up in Northeast Ohio rooting for Bone while they recorded tracks with Notorious B.I.G., Tupac Shakur and Eric “Eazy-E” Wright, all five members of the group have also passionately supported James throughout his career. Now that he’s returned to their hometown squad, they’re hoping he can end the championship drought in Cleveland.

SLAM caught up with Bone while they were making a tour stop in Cleveland to talk about that, along with the recruiting pitch they delivered LeBron last season.

SLAM: You talked with LeBron James while performing at Chris Bosh’s 30th birthday party in Miami last season. What did you say to help recruit him back to Cleveland when you saw him there, and other places?

Krayzie: Of course we always joked around with him about coming back. We were like, Yeah, we know you’re coming back home. He just laughed, and said, “Well, you know, we gotta do something.” But we just always told him we still got love for you in Cleveland and don’t let the haters worry you.

Wish: When I talked with him at Bosh’s party [laughs]. I just told him straight up, You know what you need to do, right? He’s like, “Yeah, what? And I told him, You know you need to bring your ass home. Straight out like that. Then he said, “OK, make it happen then.” And I’m like, What am I gonna do? You are the only one who can make that happen.

Layzie: We always wanted to be a part of anything that LeBron was doing. Not only because it helps Bone and our brand, but because it’s Cleveland. He’s from Akron. Every sales pitch was, “When are we going to do something?” Bottom line was, let’s work. It’s all Cleveland, Akron is just 45 minutes up the street. That’s like separating Los Angeles from Long Beach. You really can’t do that. We needed to get that whole vibe back going together and he did that.

SLAM: You’ve known LeBron was coming back to Cleveland since July. But over the last couple weeks, you’ve seen him on the floor at Quicken Loans Arena wearing a Cleveland Cavaliers uniform. What was your reaction to actually seeing that?

Krayzie: I was like, man, it’s really going down. You know what I’m saying? When I saw him on the court with Kyrie and Love, I was like it’s really about to happen! I was very excited man. Very excited.

Bizzy: It’s just time. Cleveland is happy, and I know the business is going to pick up. As you get older, you start to realize how it helps the entire city. So that’s how I think about it. Now we have LeBron back. Cleveland Browns football is going phenomenal. The excitement around it, the loyalty behind it all is just a beautiful thing throughout the whole city of Cleveland.

Flesh: I think the city of Cleveland is going to be on fire. I really believe it’s going to be a great time for the city. It’s a great day in Cleveland to have LeBron back in the capacity he’s in. The Browns are kicking ass, and then with LeBron and the Cavs, it’s really a fantastic situation for the city all around.

Layzie: I kinda knew the whole time that LeBron was going to be back. I wasn’t a fan that turned on him when he made his decision. I rode with him through the whole struggle. I just knew it was a good thing for our city and the surrounding areas when I finally saw him out there. The media attention he brings, the money he’ll bring into our city. I thought in terms of that on the business side. But now seeing all those things happening, I’m just like wow. LeBron brought that King shit back—excuse my French.

SLAM: Alongside LeBron, the Cavaliers also have Kevin Love and Kyrie Irving as well as Dion Waiters, Mike Miller, Tristan Thompson, Anderson Varejao, Shawn Marion and others. How good do you think this team could be this season under new coach David Blatt?

Krayzie: As Cleveland fans, we want to win one. We’re expecting it to be a good run. I don’t want to put too much on them or anything like we’re going for the Finals. But it should be a good, interesting year. We’re all hoping for the best. We’re hoping we get there. Will it happen this year? I don’t know, but we need one in Cleveland—for real.

Layzie: I think they’re going all the way to the Eastern Conference finals. Definitely. I think they are definitely the No. 1 contender in the East because of the way they can spread the floor. With LeBron going to the hole, dishing out to any given number of people, they’re lethal. I’m predicting Eastern Conference finals, then going all the way, really. I think it’s very, very possible this year. I know they’re humble; you can’t put too much on that plate to where you have to live up to that hype. But I like how LeBron has them gelling together already. Like, watching in the preseason how easy it was for Kevin Love to put up 25? That was just too easy.

Bizzy: With him coming back, and with those guys where they are in their careers, the team is ready. He’s the leader and he has great talent around him. That’s how I look at it. I look at it in both contexts. He has a great team, he’s lost weight, he’s faster, and he knows how to win and brings his winning experience to the team. But as far as my expectations? I’ll be honest with you; we really just want to see him suit up every night.

Flesh: I really do think LeBron has himself surrounded by a talented squad. I think he’s surrounded by a lot of great help, which will definitely bring a Championship in my opinion.

Wish: A lot of people will say that we can’t push too far too soon, but I think the total opposite. This is what they do. This is their job. If we don’t look for the Championship, and approach the season with that mental state, we’ll never get there.

SLAM: How long do you think it will take for all these guys to gel and build that chemistry needed to become a championship team?

Flesh: I don’t think it’s going to take long at all. They’re professionals, they’re technicians. They’re supposed to be able to get out there and gel and have a certain energy that’s blended. That’s why they practice. So they’re gelling, I can see it when they’re out there. It’s going to work. There’s young talent surrounding LeBron and they’re ready to bring the Championship home this year I believe.

Wish: Like I said before, they’re professionals. First and foremost, everybody will need to play their key roles. No egos can be involved, nothing like that. They all need to strive for the same thing, putting forth an overall team effort. Of course it will take a little time to gel. But that’s what we have practice and the preseason for.

Krayzie: I think with the players and coach they have, it will be a whole new style of play coming into the League. There are so many different good players with so many different dynamics, what they put together will be original. I can’t wait to see it. But I don’t think it’ll take too long to gel and get that going.

SLAM: Excluding LeBron or anyone from the current Cavaliers roster, who were some of your favorite Cavs players growing up in Cleveland?

Layzie: Mark Price was my dog. He was the coldest, wettest, three-point shooting point guard in my lifetime. I always loved watching him do his thing. And also when we had Ron Harper, he was the man when he was battling Jordan. I’d even throw in Brad Daugherty, Craig Ehlo, Larry Nance, I can’t just pick one. That was my era growing up, when they were battling the Bulls with all those guys.

Krazyie: I was really young but the first player I remember watching with my father was World B. Free. And then the whole squad we had later with Mark Price, Ehlo, Brad Daugherty and Harper. There’s just a whole lot of history with Cleveland teams, and I support it all.

Wish: You have to think of Daugherty, Price, you know what I’m saying? I liked it when we had Oak [Charles Oakley]. Probably one of my favorites would be Daugherty or Price because that was the era of the Jordan teams. We were kinda pressing Jordan’s buttons with those guys, so that’s what always sticks with me.

Bizzy: As far as the Cavs? Everybody. I liked all those guys man.

Flesh: Craig Ehlo and Ron Harper were my guys. There’s quite a few of them. But for me I liked those guys. Everybody remembers the shot Jordan hit. But they forget that Ehlo was tough enough to cover Jordan in the first place. So Ehlo, he was the man in my humble of opinion. Harper too. They held it down for real.

Be sure to check Bone Thugs-N-Harmony’s Facebook page for upcoming dates and information on Bone’s worldwide tour featuring all five members.