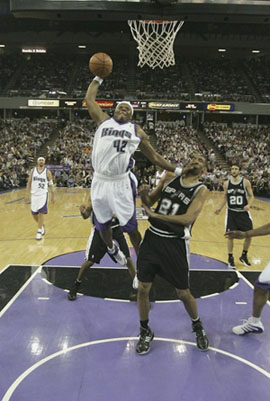 No way. Never! I guess they could try it, but Bonzi Wells and Jeff Van Gundy are not going to be happy together. Jeff is my favorite coach in the NBA, partially because of his depressing negativity during even the happiest moments of his career. But Jeff likes to reel guys in and suffocate the life out of their individual games. Sometimes it works and limits turnovers, sometimes it gets players a little upset. The highlight of the Rockets season last year was T-Mac’s explosion against the Spurs when time was running out and he just started firing away and hit four threes in about 3.5 seconds. Jeff kept Sprewell on the bench for a whole year, only letting him start when it was obvious the Knicks needed to play with more freedom. Steve Francis sacrificed his numbers to be more point guardy for Jeff, and though it got them to the playoffs, they almost had to go into an empty room, lock the door, and only one would come out.

Last year the Rockets traded for Rafer Alston. At that time I laughed at the possibility of the most famous streetballer alive – even with his game toned down for the NBA – being forced to go through the Van Grumpy grinder. In fact, on a conference call I asked Jeff’s brother Stan what he thought the Jeff-Skip relationship would be like in Houston. He slightly berated me, nothing too harsh, but he basically said that his bro would teach and help the player reach his maximum potential. Stan was last seen spending time with his family while the team he “quit” won the championship. Coincidence?

Bonzi Wells is in theory a tough, talented player. There are lots of nice things you could choose to say about Bonzi and his game. He stepped up huge in the playoffs last year, and the free agent offers were expected to come pouring in. Of course there is a negative side to Bonzi too, that is all too familiar with the ol’ contract year syndrome athletes of the world.
Another NBA coach that I enjoy, who has a similar philosophy to that of Van Grumpy’s is Mike Fratello. They were both great when they worked for TNT, and they both love to slow the game down, limit possessions and turnovers, preach defense, etc. Bonzi accepted his role as part of the 10 deep Memphis Grizz under The Czar. How did that era end? With Fratello banishing Bonzi from the team during their first round sweep loss to the Suns. But hey, I guess things would be smooth with Van Gundy, right? And Bonzi would be happy taking a one year deal with Houston and going through another contract year?

This is a bad idea for the Rockets. Although I would love to see Bonzi sign somewhere, anywhere, so we can move on with our lives.