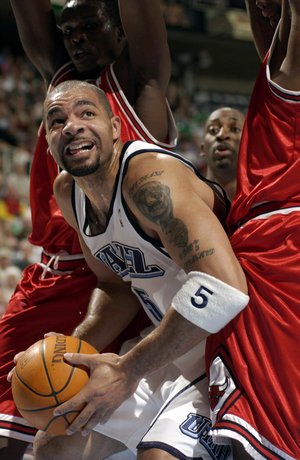 As the madness of the offseason rages on, the Chicago Bulls have been suspiciously quiet. Until now, anyway.

Rumor has it that the Bulls have begun to chat with the Utah Jazz about Carlos Boozer’s availability. The Portland Trailblazers are reportedly also part of the talks. ESPN was first to report on this:

Another major multi-team trade might be looming in the NBA with the Portland Trail Blazers, Utah Jazz and Chicago Bulls having discussed a deal that would be headlined by Carlos Boozer and Kirk Hinrich, according to NBA front-office sources.

Sources stressed to ESPN.com that no deal was imminent Thursday and that both Portland and Utah are still evaluating additional trade scenarios. But two sources with knowledge of the three-team proposal confirmed that there have been substantive talks aimed at landing Boozer in Chicago, Hinrich in Portland and Tyrus Thomas in Utah.

The deal would seem to make sense for the Bulls (financially) and Boozer (who’s been said to want out of Utah for some time now, and this move would allow Utah to ink Paul Millsap long-term). Chicago is trying to free up cap space for next summer (this could help them clear about $20 mil in salary), and with Carlos entering the final year of his deal, this would give them a solid low-post presence in the increasingly competitive Eastern Conference.

Whatever happens, I just hope that someone has video of Jerry Sloan’s reaction when told of the possibility that he might have to coach Tyrus Thomas.