Boston Celtics on the Verge of Historic Collapse? 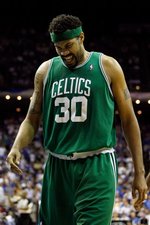 It started out innocuously enough, with a bunch of threes from the Orlando Magic’s hands raining down on top of the Celtics. Pretty soon, the whistles started chirping, bodies began falling, and before you knew it, what was once a cakewalk into the NBA Finals for Boston had become very much in doubt.

The C’s were spanked in Game 5 last night, and they may have left more than just their pride in Orlando. Their health will certainly not be an advantage with Game 6 back in Beantown looming, as Marquis Daniels (concussion), Rasheed Wallace (back pain), and Big Baby (concussion) became the walking wounded.

Boston may also be without Kendrick Perkins — whose second (and highly controversial) technical foul last night has him suspended for Game 6 — unless the League reverses the decision, a call they’re expected to make this morning.

The Magic now have all the momentum, and in the celebratory locker room last night, they sounded like a team ready to take control of the series.

A 3-2 deficit never felt so good. “We’ve got our foot on their neck right now,” Barnes said in a confident Magic locker room. “Now we have to keep it there.” No NBA team ever has fallen behind 3-0 and rebounded to win a playoff series. And it has been tried 93 times before. Game 6 is in Boston Friday night, but the Magic already are making plans for Game 7 in Orlando. The team that is down has suddenly become the favorite again.

“The momentum has shifted,” said forward Rashard Lewis. “We want to make history now. We can win this series. We have the guys who can do it” … “I think after the first two series, we had developed a false sense of ourselves,” Barnes said. “And it took us three games to realize it. But we’ve made this a series. And we plan to win this series now” … “We believe we can win this series,” Nelson said. “They have the pressure on them right now, going back to Boston. They’re going to be prepared, but we’re going to be prepared as well.”

Orlando still has a very steep hill to climb before they can force a decisive Game 7 back on their home floor, let alone win the series.

But they’re undoubtedly off to a good start towards history.