Boston Celtics Push Miami Heat to the Brink of Elimination 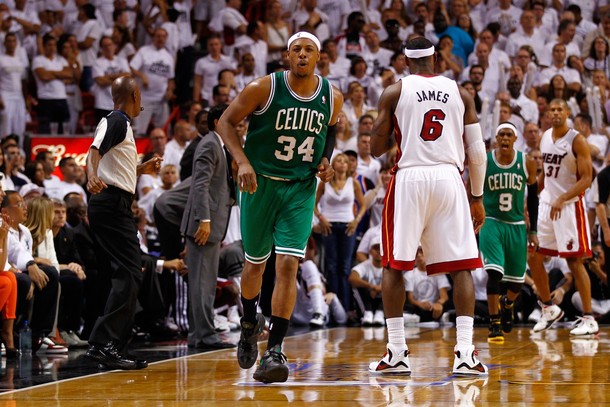 Quite simply, the Boston Celtics refuse to stick to the generally-accepted script. They refuse to die.

Most observers — from the casual to the hardcore — figured that the Miami Heat would have a fight on their hands during these Eastern Conference Finals, but that they would eventually, and comfortably dispatch the Celtics on their way back to the NBA Finals. And after the first two games, things sure looked like they would turn out that way.

Boston has roared back, of course, and stunned the Heat by taking a 3-2 series lead back to Beantown last night, with a golden opportunity to extinguish the Heat’s season.

“We normally respond real well to desperation,” Dwyane Wade said after a 27-point night. “They have what you call ‘momentum,’ but you still have to play the game. We’re a confident team.” Even in Boston, where the Celtics climbed back into this series with a pair of wins over the weekend? “We haven’t won much in that arena,” Wade allowed, “but we won one last year to give us that confidence that we can go up there and get a win. We’ve got to play a great game, as close to perfection as possible, and try to get that win.”

“Thought we played hard,” Shane Battier said. “I don’t think effort was the issue. We just didn’t play intelligent for long stretches of the game. That’s one of the smartest teams in the NBA. That’s just a killer.” LeBron James, who made just four of his last 14 shots after a sizzling start, wasn’t as hard on his team. “I think we played good enough to give ourselves a chance to win,” he said after his 30-point, 13-rebound effort. “That’s all you can ask for.” […] “We have no choice,” LeBron said. “It’s either win or go home.”

Miami Heat head coach Erik Spoelstra threw out a bunch of nonsensical psycho-babble during his postgame remarks, in an effort to motivate his team and calm the rising waters, which absolutely no one was buying. And there was talk of yelling between LeBron James, Dwyane Wade and Udonis Haslem in the Heat locker room.

The walls are closing in on the Miami Heat and their season. Can they fight back and force a decisive Game 7 back on their home floor?

The Boston Celtics — these prideful, relentless Celtics — will have a major say in that.