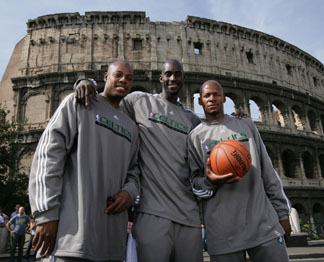 (For the rest of our NBA previews, go here.)

After suffering through a horrible ’06-’07 campaign, the new-look, and now widely feared Celtics are one of the top favorites to win the suddenly resurgent east and Atlantic Division. With previously hated-on General Manager Danny Ainge making some spectacular post-draft moves, (acquiring Ray Allen, Kevin Garnett, James Posey and Eddie House) the big green now have an odds (according to a Sports Illustrated poll) of 5:1 to win the NBA Championship.

While the rejuvenated roster is a scary one to look at, it is by no means a given that the Celtics will accomplish anything—as evidenced with the Gary Payton, Kobe Bryant, Karl Malone, and Shaquille O’ Neal lead Lakers in 2004. In getting two all-stars in KG and Ray Allen, the Celtics lost their young stud and soon-to-be all star, Al Jefferson as well as stat filler Ryan Gomes and possibly the next T-Mac in Gerald Green. While losing the latter two was more of a heartfelt loss, losing budding star Al Jefferson took a small toll on the Boston community. Over Jefferson’s first three years in the Bean we were able to watch him grow while being mentored by big-man coach Clifford Ray as well as head coach Doc Rivers. It wasn’t until this year, after averaging 16ppg and 11rpg that the world was able to see what the future may hold for the Mississippi native.

While the loss of Jefferson hurts, the Celtics have a big man by the name of Kevin Garnett who is more than able to fill that void. The 10-time all star comes to Boston averaging 22ppg and 12rpg last season. With Garnett easily being one of the top—if not the best—big man in the east, the Celtics now have an almost unstoppable force in the post. In addition to Garnett the Celtics also added 3-point specialist and 8-time all star Ray Allen. Coming from Seattle with averages of 26 ppg, 4.5 rpg, and 4 apg Allen is set to add another veteran outside threat to compliment captain Paul Pierce (25 ppg, 5.9 rpg, 4.1 apg last season). A Key to the Celtics will also be starting PG Rajon Rondo. The young PG has been given the starting spot and the success of the Celtics may rest on his slender shoulders.

The bench and teamwork.

While everyone knows what KG, Pierce and Allen can give as individual players, it will be a must that they come together as a team in order to win and win big. The Celtics must also hope that Rondo and Perkins can hold down the fort at the forward and point guard spot. With an immediate bench of James Posey, a hopefully healthy Tony Allen, Eddie House and Brian Scalabrine there is some veteran leadership, yet everyone must stay healthy. Rookies like 6’4 Gabe Pruitt and 6’9 Glen “Big Baby” Davis may be able to fight their way into the lineup as well.

With the big three starting off somewhat slow I think the Celts will still be a very strong team. With the bench playing a significant role the Celtics have what it takes to get to the NBA Finals. If Pierce, Garnett and Allen can play like we all know they can, their bench shouldn’t matter much and if they accomplish that, then every team on the Western Conference may want to prepare on how to stop three of the top 20 players in the NBA on one team. I know it’s early, but a year with the Red Sox winning the pennant (Sorry Sam, Pitt, and all you other NY fans), the Pats bringing it home (I am a Giants fan too!), and the Celts doing the almost unthinkable…..three-peat anyone?

And by God, if the Celtics do stay healthy, the big three of Garnett, Pierce and Allen might just bring back some memories of some former players you might have heard of….Bird, Parrish, McHale anyone…or lets take it back even more, how about Russell, Cousy, and Sharman.