Brace Yourselves for the C.B.A War 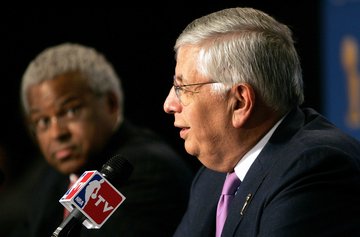 All summer long – hell, all of last season too – we’ve heard about the grim financial outlook for the NBA’s team owners, its players, and various stakeholders. And now, it’s time to get down to business for these parties, as they prepare to faceoff in the ultimate battle, in an effort to (hopefully) avoid yet another devastating work stoppage.

With league-wider revenues in the tank, the talks between owners and the players have begun early and in earnest, as they work to hammer out some kind of compromise, and a new Collective Bargaining Agreement. In other words, prepare for things to get ugly.

David Aldridge writing for NBA.com has the most comprehensive breakdown (you should really make time to read the entire thing):

The owners, according to several sources, are looking for a rollback on the revenue guarantees to players. Currently, players are guaranteed 57 percent of all Basketball Related Income — just about any money that comes from an NBA team, including ticket sales from all games (including exhibition and playoff games), broadcast rights to games, concessions and parking sales, merchandise, team sponsorships and beverage sale rights. In addition, players get 40 percent of the take from the sale of luxury suites and arena signage, and up to 50 percent of arena naming rights.

Owners want to reduce the players’ split from 57 percent of BRI to somewhere around 50 — and more than a few owners want a split in their favor. Either idea, union sources have told me over the past couple of months, is DOA.

There’s also talk of implementing a “hard” salary cap, and possibly higher luxury taxes. Overall, it’s clear that there’s quite a large philosophical (and financial) gap between the players and owners. No surprise there.

It’s a good thing both sides have begun talks this early, but make no mistake — the battle will be long and ugly.