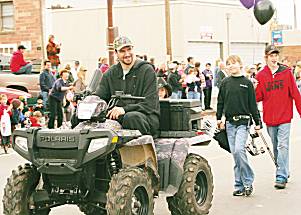 Sure he’s been rehabbing his injured foot, trying to get healthy to return to the Kings. But Brad Miller, our favorite NBA player who spends his pregame media time sitting in the trainer’s room and sucking on chewing tobacco, used Thanksgiving to return to his roots. As Linkstigator Ryan Ledford tipped us off, the big man was the grand marshall of the annual Thanksgiving Day parade in Loomis, California, which is known for having crazy floats, spectacular balloons and grand marshalls riding on tractors.

My favorite thing about this whole mess is the caption on the photo in the Loomis News:

Members of the Assembly of God Church in Loomis, above, wave to the crowd gathered on Taylor Road for the annual Day Before Thanksgiving Parade. The theme for this year’s parade was “Give Thanks.” Sacramento Kings player Brad Miller, right, delights well-wishers along the parade route. Miller was the official Grand Marshal of this year’s event. To see more photos, go to page 8 in today’s Loomis News.

Wonder how many committee meetings and straw polls it took to come up with that theme?