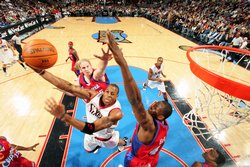 When Elton Brand spurned the Clippers and made his way towards the eastern seaboard, nearly everyone immediately penciled the Sixers into one of the top two spots in the Atlantic Division.

For Philly to seriously challenge Boston, though, Andre Iguodala will definitely have to be part of the long-term picture.

Word on the street is that Brand’s former team (among others) is interested in his gravity-defying teammate, but Elton isn’t too worried. Upper management has given him certain assurances. From the Philly Inquirer:

“That’s a guy we have to have,” said Brand, who repeated: “Management has let me know they’ll match any offer.”

Feel free to jump on the Sixer bandwagon now, kids. There aren’t too many seats remaining.