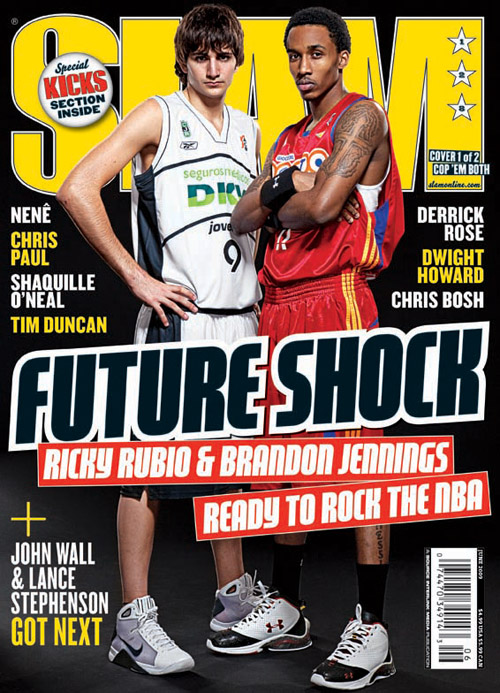 You may also find it troublesome to fathom that Jennings’ appearance on the cover of SLAM 128 and our man Lang Whitaker’s cover story on Jennings and Ricky Rubio hit newsstands four years ago this summer.

It’s been a whirlwind of twists and turns for the Compton-born guard ever since he forwent chances to play at likes of Arizona, Kansas and Kentucky, as the top prospect of the Class of 2008, to ball with Lottomatica Roma. Of course, like any Hollywood-like sports story, he struggled to make the transition to the Euroleague and then slipped in the 2009 Draft to Milwaukee at No. 10. Press the fast-forward button to 36X and you skip past his 55-point outburst, some pick and rolls with Andrew Bogut, another SLAM cover, endless poor shots with co-gunner Monta Ellis and you arrive at this summer.

With confusion mounting and steadfastly revolving around Jennings and Nikola Pekovic’s empty offer sheets, Twitter blew up with jokes about the Oak Hill product turning down a four-year/$40 million extension before last season. Yet at the crack of 5:30 p.m. yesterday, Jennings’ Bucks drama was over with the click of Marc Stein and Adrian Wojnarowski’s pressing send. He’s now the newest Detroit Piston and we’re all being held captive by the new-look Bad Boys, waiting to see what this ridiculous roster will produce on the court.

But if you sift through all of the negative hype, ball-hog criticisms and high expectations, Jennings is still the pioneer kid who took a risk and went to Italy while nonchalantly accepting an offer to become the face of Under Armour Basketball.

Turning back to Lang’s feature, Viva La Vida, if you take his quotes—from before he was drafted—out of context and apply them to his current task of leading the newly assembled motley Detroit Pistons team, it’s not hard to imagine Jennings is excited and determined for a fresh start in Mo-Town—something he told the Toronto Sun he’s “happy” about.

“I mean, the money is nice, but I love challenges. I feel like my whole life I’ve always took on challenges. When it was me in 11th grade going against Derrick Rose, me playing against OJ Mayo, Eric Gordon, all those top guys. So you know it’s nothing but another challenge to me. I knew it wasn’t going to be easy. I knew coming in it was going to be a challenge, a real big challenge.”

In 2009, Jennings said the above about taking on the challenge of surpassing college and playing a year overseas before entering the NBA Draft. Today, his challenges are now leading the Pistons back to the Playoffs, fitting with Josh Smith and getting the entire team the ball while still getting some of his—all after a lower contract than he initially craved. Oh, and meshing with new head coach Mo Cheeks too.

Not many know that Jennings actually struggled to adjust from high school to Italy, resulting in putrid averages of 7.6 points and 1.6 assists per contest over Roma’s 16 games in ’08-09. His rationale for the statistical blunder was inconsistent playing time and sacrificing for the betterment of his team. He’ll have to do something similar in Detroit, a team whose new roster desperately needs a point guard to run whatever style of play Cheeks instills in the Palace. That will likely mean sacrificing the 17.5 a night he dropped in Milwaukee.

“A lot of these kids, you know, that get drafted from overseas, they’re playing on a lot of good teams. And all they ever do is just show potential that they can play. And, you know, fortunately I’m on a great team right now—a good team with a lot of talent—so if I was on another team that wasn’t so good, they just let you do whatever.

Compared to many European players who get drafted, stay overseas and eventually never come to the League, Jennings used his time playing with a good club like Roma to learn and grow before coming back stateside. Instead of wasting away on Bucks team that is merely attempting to be an 8-seed in the East every year, Jennings is going to a team that at least has a chance to compete for the second round of the Playoffs next season.

“I would have had those numbers. Instead, I’m on a good team, where I’m learning, and I’m just in a great situation. So I’m not worried about what people say about the numbers and stuff like that.”

Again, Jennings numbers’ reflected his bumpy career overseas. Ultimately, if he sacrifices his scoring in Detroit, his lower numbers might attract criticism and naysayers claiming he’s regressing after a pig payday. But that likely won’t be the case if the Pistons are doing well in the win column and his change of playing style might morph him into an top-tier point guard in the L.

Even with his rocky road through Italy, Jennings never lost faith that the NBA would take interest in him and his NBA future was bright. People might be criticizing the Pistons for capping themselves out for the near future while taking a “screw it” risk on their…for the lack of a better term, weird roster. But they’re going to be an entertaining team to watch and everyone is going to tune in.

Get your League Pass ready.