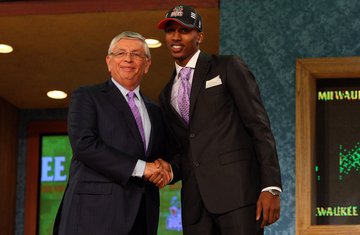 On a night when no major trades went down, no one wore a memorably hideous outfit, and when the majority of folks were still reeling from the sudden death of Michael Jackson, this was far and away my favorite moment of the 2009 NBA Draft.

Brandon Jennings casually strolled into MSG last night, long after his name had been called, and shook a confused and slightly amused David Stern’s hand.

It was awesome in every way, as the kid who bolted for Europe immediately after his high school career continued to do things in his own, inimitable way.

The Draft was apparently not the only thing Jennings was late for last night, as CNBC‘s Darren Rovell revealed on his Twitter page:

Brandon Jennings hasn’t showed for his own Under Armour party yet.

Jennings is nothing if not consistent in his tardiness. And, well, you just gotta respect that.