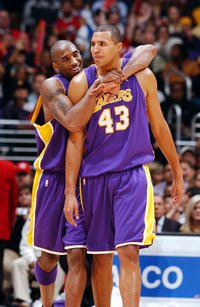 The mind-numbing Kobe trade talks have already been partially blamed for the downfall of one franchise (the Bulls), and pretty soon, they might be for another (the Lakers).

According to Brian Cook, former Laker and the newest member of the Orlando Magic, Bryant’s desire to bolt town hurt a bunch of people’s feelings in the Laker locker room.

Cook says he is friends with Bryant, but also was one of the players hurt by the All-Star shooting guard openly demanding a trade to leave the Lakers.

While I don’t doubt that the offseason circus had negative effects on team morale, it’s hard to ignore the indisputable fact that the Lakers got off to a strong start, and that, following a summer when everyone questioned their worth as human beings basketball players, the Bryantaires began the season playing with a noticeable and sizable chip on their collective shoulder.

I don’t know, could it be, perhaps, that the Lakers (9-8) aren’t a very good basketball team to begin with? Just trying to think outside the box here.