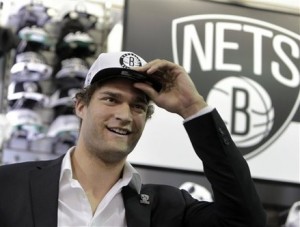 For now, the prevailing wisdom around the NBA, appears to be that the proposed Dwight Howard trade to Brooklyn has fallen apart.

Which opens the door for the Nets to ink restricted free agent center Brook Lopez to a maximum level contract, which reportedly could be finalized today.

Nets president Billy King and Lopez’s agent, Arn Tellem, are finalizing the length of the deal – four years for $58 million, or five years for $78 million – and ironing out protections on the back end to account for a right foot that Lopez broke twice in the past year, sources said.

As close as the Nets and Lopez are on a deal, several sources wouldn’t rule out the possibility of Lopez still signing an offer sheet with another team for the full four-year, $58 million maximum contract if the final details are unable to be worked out. The Charlotte Bobcats have shown the most interest in signing Lopez to a max sheet, sources said. The Nets would undoubtedly match, but signing the offer sheet would be a way for Lopez to avoid any partial guarantees based on games that the Nets might want in his deal. King is scheduled to travel to Los Angeles on Wednesday to work on completing the deal with Tellem.

It all remains very fluid at this point, with Dwight Howard and the Orlando Magic’s front-office holding much of the NBA hostage until a decision is finally made.

Should Brook Lopez ink his deal with the Brooklyn Nets, he can’t be part of any trade package until January 15.