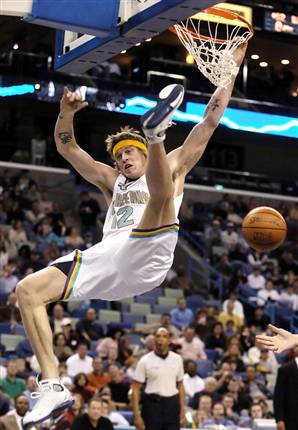 In case you missed it, there was a great feature over the weekend on SI.com from Jon Wertheim, in which he catches up with The Birdman, Chris Andersen. And for the first time since his suspension last season, Andersen talks about his drug problems.
We already knew Andersen’s route to the NBA was so circuitous that he probably needed Mapquest on his cellphone. He pretty much grew up parent-less, for example, and dropped out of junior college to play with a Chinese basketball team.

We didn’t know a lot of things in the article, though. For instance…

• He dated a woman who resembled Pamela Anderson.

• He narrowly avoided Hurricane Katrina, driving backroads out of New Orleans and ending up in Denver, where he crashed with friends.

• He enjoys drinking alcohol: “My mom is part Native American and my dad is Danish. I can put it down.”

• The story never specifies what drugs Andersen took, but Andersen does admit to taking drugs.

In the end, Andersen hopes to return to the NBA. He says he’s straightened himself out — he spent a month in rehab — and he plans on staying straight. It’s going to take an owner with some stones to sign him, but with so many bad players in the NBA these days, shouldn’t there always be a place for someone like The Birdman?