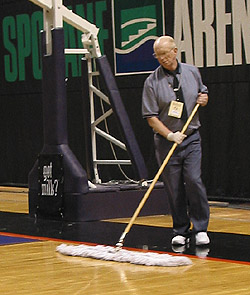 It’s the NBA on ABC! And it’s 1 p.m., which is an ungodly start time for a Sunday. So uncivilized. This had better be a good game, at least.

It may as well be an ESPN game. Same pregame show. It’s kind of confusing, actually. In fact, Mike Tirico and Hubie Brown are actually holding ESPN microphones.

Sure, let’s talk through the jump ball and the first basket, shall we?

Guess he’s OK. And so is Shaq as he misses the first free throw. And the second. And the Bulls have two turnovers on two possessions.

Shaq has both buckets for the Heat. The Bulls turn it over again, and Shaq dunks it again. 6-0, Heat. Make that 8-0. P.J. Brown stops the bleeding. Hubie says something about the Bulls “maximizing the width of the floor.” Right.

Gordon gets hammered, hits a pair. Meanwhile, Udonis Haslem has four points, as does P.J. Brown. Posey misses a three, Wallace rebounds, and Ben Gordon hits a three in transition. 12-9.

Wade throws up an airball over a double team, and then fouls Gordon in the backcourt.

Shaq rebounds a J-Will miss, sinks a jump hook while getting fouled. And nothing.

Deng misses at point-blank range. Settle for the 20-foot jumper! Luol’s like the anti-Vince—you WANT him to not drive.

I’ve been quite impressed by the Bulls poise in this series—no matter what happens, they just play their game. And so far, it’s worked out quite well. Outstanding job by Scott Skiles.

Heat turnover, and Gordon squanders it with an absurd shot. Posey hits a three on the other end. And Ben Wallace delivers a textbook hook that leads to a Hubie Brown chuckle.

Wade hits a pair of free throws and Wallace runs over Posey. Offensive foul. And Wade hits Haslem with a driving alley-oop, and the Bulls call time. 21-16, Miami.

SPLIT SCREENS FOR INTERVIEWS ARE THE WORST. I really wish there was another channel where I could just watch the damn game without any stupid distractions.

Wade with a nice spin move that leads to nothing. Nocioni gets snuffed for the second time in a row, and Wade finishes. And Nocioni skips the lane and hits a three. 25-21, Bulls. Gordon adds a pair of free throws, and it’s a two-point game. And of course Antoine Walker ends the first quarter with a 30-footer—which puts the Heat lead back where it should be. 28-23 after 1.

Shaq and Wade both pick up offensive fouls. “It’s like the side of the building falling on top of you, OK?” OK, Hubie. Here’s your soup.

And there’s another offensive foul on Shaq, this time on the perimeter off the ball. Gordon follows that up with a three, and it’s 31-29.

Kapono picks up his third foul and wanders off with a pained look on his face. Wade comes back in. Walker misses a deep three, Sefolosha rebounds. The Bulls offense is, how you say, anemic. Wallace goes out with his third foul.

Sefolosha with a nice move to the basket that comes up short, but Deng is there to clean up. 34-31 Miami.

I forgot that the Heat retired Jordan’s jersey. So weird.

Wade to Shaq, and Deng comes back with a jumper. About time he got on track. Shaq misses a pair, Hinrich hits a three, and it’s 36-all.

Wade hits a pair, and P.J. Brown gets an and-1 and makes it look like he meant to hit the shot. Suuuure he did. That’s three on the Diesel, who takes a seat. Brown casually misses the free throw, then fouls Mourning underneath on the other end. He goes out for Malik Allen as Zo misses a pair.

Nocioni misses from the corner, and Wade hits a jumper on the baseline.

Mourning hits a shot, gets fouled, and acts like a jackass. It’s hard to see. And he actually makes the free throw. Three-point Miami lead.

Deng hits a 20-footer while holding his face. Mourning gets a dunk on the baseline, he’s got 10. The Bulls are jacking threes. Hinrich saves a possession that ends with Nocioni free throws. One of two. Wade throws up an airball that goes out of bounds off of Haslem. And Gordon is fouled on the shot with 5.7 seconds left. Miss, ice, hit.

And Wade drives for the and-one with .6 seconds left. Impressive. He hits the free throw, and it’s 48-44 at the half. Chicago has never led.

Gordon strikes first in the third with a deep two. And Hinrich misses a three off a Heat turnover. Heat miss, and P.J. Brown scores in the paint. All knotted up at 48, until Wade breaks it with a layup. Gordon miss, Deng miss, Heat ball. Williams splashes a three, and the Heat are back up five. In to Shaq, and it’s seven. P.J. misses a baseline jumper, but Deng is there to clean it up.

Hinrich misses a clean look at a three in transition, Haslem scores on the other end, and the Bulls need a time out. 57-50 with just over seven minutes left in the third.

If that’s the play Scott Skiles drew up, wow. Back to the drawing board. Clipboard. Whatever.

Posey fouls Deng, who hits both. And Hinrich fouls Wade, who also hits both.

Shaq snuffs P.J. Brown, Deng misses from deep, and the Bulls are cold as ice.

Hinrich gets called for his fourth after swatting Wade from behind. He takes a seat. Wade hits one of two, his first FT miss of the game. And Ben Gordon scores before anyone knows what’s going on. Including me. Shaq misses, Duhon hits a three on a second look. 60-57, Miami.

And Deng hits another baseline jumper to give the Bulls their first lead of the day, 63-62. Posey misses a three, and Haslem is called for a loose-ball foul.

*that was legitimate foreshadowing. I didn’t go back and write it after the fact like, well, this.

I’m pretty sure Mourning is trying to orchestrate a trade back to the Nets.

Gary Payton, charge. Somehow beating Gary Payton to the spot can’t be all that satisfying anymore. Deng hits another jumper, this time from up top, and the Heat call for time. 65-62 Bulls with 1:20 to go in the third.

Walker misses a three badly, but Wade is right there to put it up and in. And Posey fouls Deng in the paint. Non-shooting. Nocioni misses from the top of the key, Posey rebounds, and Wade misses a layup. Duhon hits a three over a Nocioni screen, and Wade launches from 50. Miss. End of three, Bulls lead 68-64.

I love that the buzzer beater in that Ray Allen WNBA commercial is a layup.

Wallace gets fouled underneath by Mourning, and makes his first trip to the line. Uh-oh. Miss, hit. 69-66.

Dwyane Wade has two more points than he did a second ago.

Wade to Mourning underneath, who’s fouled by Nocioni. Good foul. Short, short. Wallace rebounds. Deng misses a hotly contested jumper from the corner, and Wallace is fouled trying to tip out the rebound. Nocioni throws up a prayer over Walker, and hits again. 74-68, Bulls.

Mourning catches it in deep and scores over Wallace (Wade’s 10th assist, I think), and Gordon responds with a fallaway over Payton with the shot clock winding down. 76-70, 8:10 remaining.

Alonzo Mourning is a lunatic.

Shaq and Kirk are back in. Shaq misses his first shot. Kapono misses a three, but Miami gets the offensive rebound and he doesn’t miss the second time. Wait, that was Wade’s 10th assist? I’m confused. Heat trail by three.

Gordon drives into the teeth of the Miami defense and gets chewed up. Out of bounds to Chicago. And again. Two seconds on the shot clock. Nocioni misses the jumper, Posey gets his 16th rebound, and Wade gets called for an offensive foul after he knocks down Hinrich. Wallace misses a hook, Haslem gets the board, and Shaq goes to the line. Misses the first really badly, and the second not quite as badly. Posey gets the rebound, but dribbles out of bounds.

Gordon fouls Posey in the backcourt, and it’s called a clear path foul. He hits both, and Miami inbounds down one. Wade and Haslem run a high screen and roll, and Haslem tries to get it underneath to Shaq but it spills out of bounds.

Ben Wallace! Offensive rebound putback. Wade misses off glass, Nocioni clears out. On the other end, he bricks a three.

Deng scores, is fouled, misses the extra. Bulls up five with just over three minutes to go.

The Heat are scrambling for loose balls right now, scrappin’. And you get the feeling that it’s probably too late.

Hinrich strips Wade, Shaq winds up on the floor, and Wade picks up his fifth foul. The Heat are over the limit. Gordon to the line, hits both. 84-77, Bulls, 2:45.

Wade on the baseline. “That was a lucky play, and a very difficult shot.” Ah, Uncle Hubie.

And it’s hack-a-Ben for the next 22 seconds. He hits the first, a lovely rainbow job. And another—that’s six straight! I can barely hit six straight!

Shaq can’t score, and someone fouls Ben Wallace off the ball on the wrong end of the court while Nocioni is attempting a layup. Before it, actually. And Wallace coolly hits two more. And Hinrich gets a steal in the backcourt, the Bulls are up nine, and we’re inside of two minutes. Hinrich misses a deep three, but the Heat commit another turnover—Wade is on his way to a dubious triple-double.

Ben Gordon goes back to the line, hits both.

Scottie Pippen is wearing a shirt with epaulettes on it.

And this is in the books. Final score, 92-79 Bulls, who have won their first playoff series since MJ and Pip were in town. I’m going to get some extra enjoyment out of those T-Mobile commercials for the rest of the playoffs.

Man, I love double- and triple-headers, but it would have been nice to hear some more postgame interviews. Where you at, Zo?

The Heat became the first-ever defending champs to get swept out of the first round. And it couldn’t have happened to a nicer bunch. Actually, I like some of the Heat players as individuals—quite a few of them—but as a team, they’re so unlikeable. Maybe it’s Pat Riley’s fault, I don’t know. (Also, in the year of the UF repeat, it’s interesting that Florida went 0-8 in the NBA Playoffs.)

The Bulls, man. I’ll definitely be posting the other half of my interview stuff from the SLAM story this week as we wait for the second round to start. They’re just playing remarkable basketball right now, and their confidence should be skyrocketing. Even when their jumpers aren’t falling, they get a lot of second opportunities and find ways to make the defense pay.

It’s sort of hard to believe that the Heat were the defending champs.

The series with the Pistons should be interesting. The Pistons have a lot of similarities to the Bulls—long defenders, mid-range shooters, a veteran frontcourt. The biggest difference is experience, but the Heat had that as well, and look where it got them. The head says Pistons, but the heart disagrees. Bulls in six.