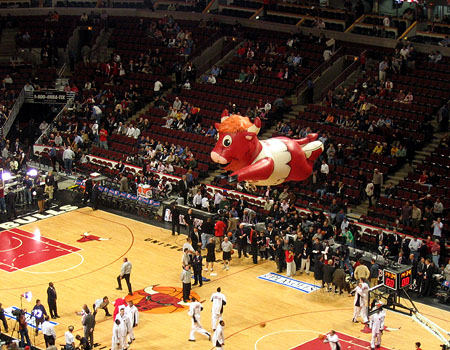 Today, Matt Bernhardt from Blog-A-Bull helps us preview his team, the Chicago Bulls.

SLAM: Sports Illustrated’s Chris Mannix recently predicted that the Bulls will win the championship this season. Was he high?

MB: Nah, we all know Kelly Dwyer is SI’s answer to Cliff Robinson (kidding, Dwyer is friend to the blog community). Mannix may have gotten a contact high though, as even the most optimistic fans don’t envision them winning the title this year. If everything goes right they have a chance to win the East, but the thing about the NBA playoffs is that there are few surprises, the Bulls would truly have to be the best team in the NBA to win it all, and I don’t see that happening.

The biggest move this summer was Big Ben coming over to the Windy City. How much better should he make this team?

He’ll take them from being a top-5 defense to being the best defense in the league. The Bulls already had a very good defense, and when Tyson Chandler was healthy and productive the Bulls streaked down the stretch for those 41 wins. Now having Wallace is like getting the best of Chandler every single night, and even better in terms of Wallace’s lack of committing fouls and turnovers. While the Bulls lead the league in defensive FG% the past two seasons, it was mitigated by the differentials in free-throw attempts between the Bulls and their opponents. Ben will give the Bulls a major improvement in that area, keeping himself on the floor and opponents off the line.

The Bulls seem to have all the pieces in place to form a great team. How close are they to achieving that goal?

Right now all those pieces equal a very good team, not a great one. To be a great team, one of their young core of Kirk Hinrich, Ben Gordon and Luol Deng needs to leap into that all-star level. My frontrunner would be Deng, he’s still very young and already a solid contributor.

If it doesn’t happen internally, they’ll need to use their young players and appealing contracts to get another star-caliber player. I really believe that GM John Paxson is giving his Bulls a 2-year window to win a title while Wallace is still near his peak, which may mean he’ll have to ncontinue his aggressiveness to get the Bulls from very good to great.

How much fun is it to watch Ben Gordon everyday?

I find it more maddening at times than fun, because Ben has games where he is unstoppable, but then there’s the inconsistency that can drive a fan crazy. Ben is a special scorer, and at times you can’t believe he’s even getting his shots off, let alone having them go in. And he’s not afraid to take big shots, something that is especially valuable to the Bulls with their lack of true scorers. I’d like to see him take the next step in his game though, with better defense and cutting down the turnovers. He also needs to become less reliant on the jump shot, and attack the basket for more high-percentage opportunities. Watching Ben every day has you holding him to a higher standard because you see the glimpses of stardom, so seeing the growing process with him will be a joy this season if he shows improvement.

Alright, enough foreplay, how will the Bulls fare this season?

I think the Bulls will improve tremendously after their offseason added depth and consistency through their veteran acquisitions (and don’t forget two lottery picks in Tyrus Thomas and Thabo Sefolosha). With the players they have and a coach like Scott Skiles, the Bulls are the type of team who will always give an effort on defense, keeping them in every game. They will absolutely beat up the lower class of the NBA, and steal some wins when the dog days of the season lead to many ‘off nights’ for opponents. I have no clue whether they are ready to get to the Finals, but it is very likely that the Bulls can rake in regular season wins and finish with a top-3 seed. I predict 55 wins.