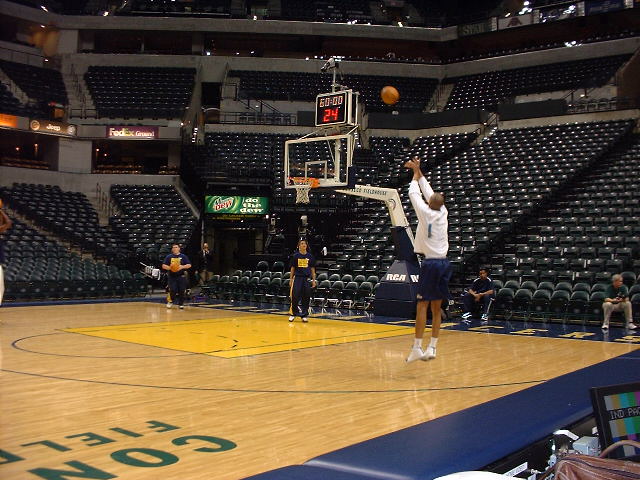 Well. Having read Ryan’s introductory column, I feel like I left a few things out of my own introduction. Not to mention my choice of header probably ensured that no one read it anyway. So I figured I’d bite his style (just a little) and throw in a couple more cents. Hell, I’ve read enough bios in my day, I should be able to write one.

1) I grew up in New York. Long Island, to be exact. Suburbia. The house I grew up in wasn’t all that far from the Nets’s ABA arena in Commack—although by the time I actually went there it had been converted to a flea market where I bought a pair of those folding Ferrari sunglasses. The stands were still intact, though, as was the scoreboard. It’s since been knocked down to make room for something important, like the Island’s 2,385,097,654th mini-mall.

2) I became a basketball fan because of Michael Jordan. This was after he was already in the League, probably during his rookie year with the Bulls. It’s embarassing, really—I was eight when Magic and Bird played for the NCAA title, and 11 when Jordan beat Georgetown, but I don’t remember either of those games. I do, however, remember a lot of bad Bulls games, featuring guys like Brad Sellers and Granville Waiters and Dave Corzine. I also remember no one believing me when I said that Jordan would win a championship. Ha!

3) The first professional basketball game I went to was in the late ’80s at Madison Square Garden. The Knicks were playing either the Hawks or the Bulls, because those were the only two teams I saw play (besides the Knicks, of course) for a few years. This was because I went to games with my friend Chad, who was a Dominique Wilkins fan. So it was always either Wilkins or Jordan. Seemed like they each always scored 40-plus, too. Scorers always did like playing in the Garden.

4) The first event I covered for SLAM was Sixers training camp at the University of Delaware in 1995, Jerry Stackhouse’s rookie year. At one point when he was conducting an interview right in front of me, he unwrapped his wrist, allowing his bankbook to fall to the floor. I briefly considered grabbing it, but dismissed it as a bad idea. The highlight of camp was watching Shawn Bradley literally trip over the halfcourt line in a scrimmage, at which point he was basically laughed off the court by the fans. So much for the future.

5) My first piece in SLAM (about Shawn Bradley, no less) appeared in issue No. 5. I joined the full-time editorial staff in 1996, and became Editor in Chief in 1999. I was EIC for six years. In that time I made several good decisions, and many bad ones (naming Stephon Marbury one of the 50 best DUNKERS of ALL-TIME, picking Darko Milicic to be Rookie of the Year). Over the past 10 years I’ve gotten to interview pretty much everybody who’s anybody—Shaq, Jordan, Iverson, Kobe, Garnett, LeBron. I’ve been in champagne-sprayed championship locker rooms, Kevin Garnett’s house, and Jermaine O’Neal’s Bentley. God only knows how many games I’ve been to. I saw Kobe play in high school, Vince Carter play in college, and Nate Robinson play at West Fourth Street. I’ve watched Reggie Miller shoot pre-game, and Charles Barkley drink post-game. Someday I should probably write a book.

6) It’s been hard to balance the whole fan/professionalism thing. No team has captured me like Jordan’s Bulls once did, so it’s not THAT hard for me to remain somewhat objective (although I’m still a Bulls fan). But I can still get a little starstruck from time to time. And even though I’m old enough to be LeBron’s dad (assuming I was a little precocious), guys like him can still make me feel like a kid. And that’s GOOD. Too much perspective is probably a bad thing in this profession. Or at least for this magazine. Website. Whatever.

8) There are guys in the League who I consider friends. Not necessarily in the “hey, let’s hang out” sense, but in the sense that we talk whenever we run into each other (and if I called, they’d probably answer the phone). Guys I genuinely like. Guys like Paul Pierce, Jamal Crawford, Jermaine O’Neal, Marcus Camby, Eddie Jones, Troy Murphy and Al Harrington. I like to think I still write about them objectively.

9) While I’ve played on the floor of Madison Square Garden, that doesn’t mean I’m a terribly good basketball player. Back in college I used to be able to dunk on occasion, but that was a lot of years, beers and ankle sprains ago. I’ve lost more than a step—although I can still light it up from outside every once in a while. Never play me to go left.

10) Gonna one-up my colleague here with a 10th entry of random facts: I went to the University of Delaware, and was watching (on TV) when our first-ever NCAA tournament team was slaughtered by the Nick Van Exel-led Cincinnati Bearcats. I own game-worn jerseys from Dee Brown, Harold Miner and Isaiah Rider. There is a matted photographic print of Michael Jordan over my bed. And if the WNBA disappeared tomorrow, it wouldn’t bother me in the least.