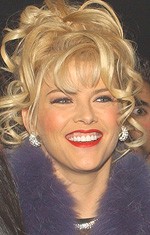 Well, that worked out well for John Salmons, at least. After getting stuck between the Raptors and the Sixers and then finding himself without a team, tonight John Salmons agreed to a multiyear deal with the Sacramento Kings. This seems like a nice fit, as long, athletic players tend to flourish in Sacto. And the Kings are making a racket out of picking up guys that find themselves homeless (like they did last season with Shareef Abdur-Rahim).

The flipside to this is that Bonzi Wells will not return to the Kings next season. His agent said the Kings weren’t offering enough money, and that what they did offer included — get this — a weight clause. Did they think they were signing Anna Nicole Smith?

The Sacto paper makes it sound like a sign-and-trade is still a possibility, though it’s going to be tougher now to find Bonzi a home. Denver might have been a possibility, but since they traded for JR Smith that door might be closed, as well. How about Indiana? Anyone?