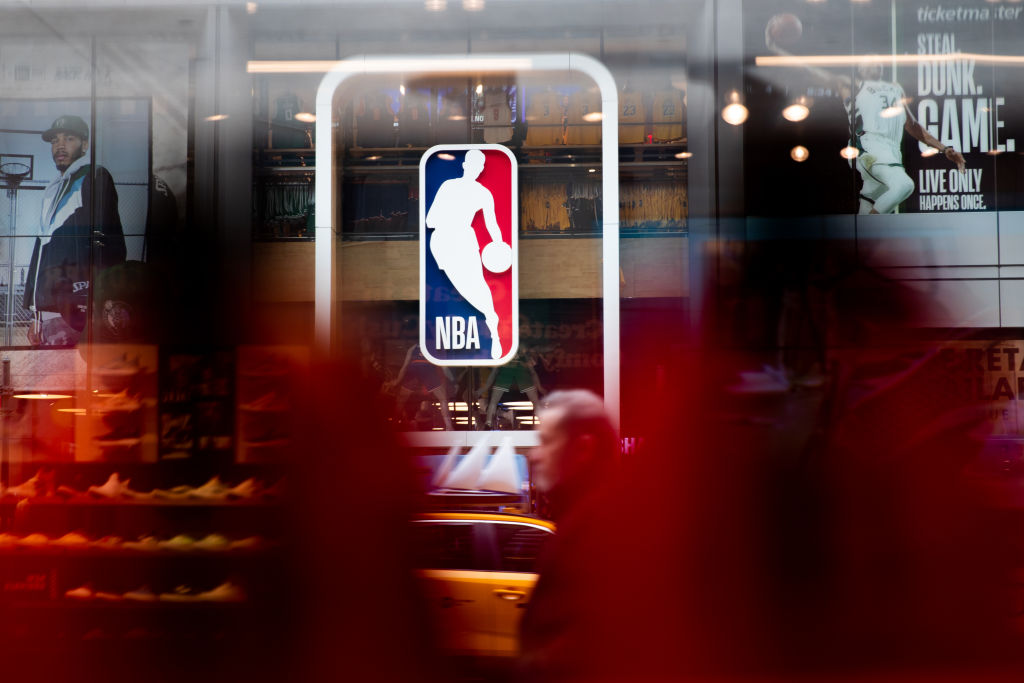 The evening of March 11, 2020 was a whirlwind for all of us. You may remember exactly where you were and what you were doing when confusion in the tunnels of Oklahoma City’s Chesapeake Energy Arena grew into concern that something more foreboding was about to happen.

The realization that a symptomatic Rudy Gobert and the Utah Jazz would not tip off for an otherwise typical mid-March game with the Thunder sent shockwaves throughout the professional sports world and North America at large.

But while sports fans watched from a distance as the NBA juggernaut rushed to orient itself following the first strike it would face from the coronavirus pandemic, the men and women who work tirelessly to coordinate the very existence of professional sports in the first place were dealing with the disaster from the inside.

Schwartz is the founder of Excel Sports Management and a player representative whose client list resembles a roster in the All-Star Game. Eight months after COVID-19 pushed the NBA into unprecedented territory, he opened up about how the players’ side of the business of basketball has navigated 2020.

For as confused as the fans and media were when that March 11 contest was called off, there were hundreds of players equally confounded but with significantly more hanging in the balance than the rest of us, their livelihood for one.

“We quickly got on the phone with all of our clients and just talked to everyone. Literally over communicated,” Schwartz said.  “Across the board we talked to everyone to gather as much information as we could. But, as you know, there wasn’t any information, really. Nobody knew anything at that moment.”

Players turned to Schwartz and his colleagues for guidance as they always have for all things business, from contract negotiations and sponsorship deals to simple assistance navigating the life of a professional athlete.

“You had players calling us not only about the league being suspended but saying ‘hey I may have been exposed’,” Schwartz said. “We were just trying to keep everyone calm with little information and to really understand where we were going to go.”

What initially began as a two-week hiatus became an indefinite one as the world slowed to a halt and professional sports faded off the public radar altogether. Once the initial shock of the moment subsided, players started to better understand the virus and the role that a shutdown played in getting everybody back on track.

As the players adjusted to their new realities at home, their representatives, their union and the league itself were left to plot out a course for what came next. The mere fact that nearly three quarters of the NBA season had come and gone unaffected by the coronavirus allowed them considerably more runway before having to come up with a solution.

The initial question, Schwartz recalls, was not how the league could return but whether it even should in the first place. Ultimately, player safety was front and center in the conversation about how to navigate the unprecedented times.

“I think a number of people said if the players are just going to wrap themselves in bubble wrap from April to the summer and not do anything, that’s one thing, but we all know that’s not what’s going to happen,” Schwartz said.

This is what set the stage for early discussions about returning to play in a bubble where safety protocols could be enacted and enforced, where players could comfortably workout and hone their craft in safe and controlled environments.

Initial discussions involved a pair of bubbles, one for each conference, including a setup that would split the league between Atlanta and Las Vegas. Eventually, Houston arose as a possibility instead of Las Vegas but all were overtaken when Orlando’s Walt Disney World emerged as a viable alternative.

In addition to the necessary infrastructure and abundance of accommodations, the Disney campus offered the league something that the other bubble locations didn’t: the option to go outside.

Of course, while Disney was uniquely suited to accommodate as many teams as it did, just 22 of the league’s 30 teams were invited to the bubble, leaving eight franchises without closure to their 2019-20 campaign and considerable revenue on the table.

Among the teams that didn’t qualify for the bubble, there was a mixed bag of reactions. Players that wanted to get back to playing were encouraged to lobby the league and union to do so.

“At the end of the day, I think it was too much logistically,” Schwartz said.

Equally significant were players on teams that just barely qualified to be involved in the bubble, individuals that faced steep uphill battles to even reach the postseason let alone contend once they got there. There was a mixed bag of reactions among those players, too.

“I think for a lot of the players, it was a good thing,” Schwartz said. “For some of the guys, I think they thought ‘why are we forcing the issue here to go play? Why are we doing this?’ At the end of the day, they’re professionals, it’s their job and I think it was important that they went back and played.”

Just as speculation about the league returning to play gathered momentum though, many of the same players that would later return to the court under historic circumstances were also lending their time and their voices to a growing, nation-wide movement in protest of social injustice.

“Listen, they were ready to give up a lot for things to continue to fight for change but at the end of the day they were able to do both,” Schwartz said. “I’m really proud of them that they took this stand and they’re continuing this fight for change.”

By returning to action the players secured their platform but it’s important to note that the power they have stretches beyond the audiences they reach as celebrities. On this too, Schwartz and his colleagues, were able to advise.

“What you need for any cause is a platform,” Schwartz reminded the clients with whom he discussed the movement, “and you need resources to get things done.”

Resources, like the generational wealth that players would run the risk of compromising should they have chosen not to play.

“If you want the resources to help change what happened, you have to play. You need to be paid,” Schwartz said.

In the ensuing months we saw a number of athlete-led movements arise as players tested their collective might off the court. While activism in sports isn’t new, we’ve seen a generation of young athletes settle into a prominent role in the social justice movement.

“I think athletes are generally more willing to speak up now because issues are more exposed,” Schwartz said, noting that the increased exposure allows players more of an opportunity to connect with others willing to take similar stands.

These days, one need not look far to find players advocating for change in their own time, utilizing the platforms they enjoy as professional athletes and even pressuring the league itself into action.

Despite the successful execution of the bubble, which not only showcased elite quality hoops but preserved approximately $1.5 billion in revenue that would have otherwise been lost, the financial implication of the shutdown did and continues to have a tangible effect on players.

For starters, as the global economy has adapted to the new circumstances that brands and customers face, league partners and player sponsors have been forced to pivot, too.

“Endorsement deals were impacted by COVID,” Schwartz said, “but rather than brands pulling back on deals, we saw them get creative with their marketing budgets and plans.“

Suddenly players with endorsement deals were on more virtual production sets than commercial ones, with speaking engagements conducted over Zoom rather than in-person.

That’s not to say that players didn’t see their bottom line directly impacted by the pandemic, however.

When the league shut down, an increased portion of player salaries was held in escrow for the final part of the 2019-20 season. The league’s escrow account is a neutral buffer account that can be drawn from in the event that the negotiated split of the league’s basketball related income doesn’t align with projections.

Typically, 10% of a player’s salary goes into said escrow account. If league revenue comes out to what had been projected, the players get their money back. If revenue drops, the owners can recuperate the split they’re entitled to as determined by the last collective bargaining agreement.

Suffice it to say, projections for 2019-20 fell disastrously short, thrusting the league and the union back to the drawing room ahead of the 2020-21 campaign.

While there was initial uncertainty about when the new season would start, how long it would be and what the games would look like, the financial logistics were front and center for those like Schwartz and Excel Sports Management working behind the scenes to ensure that their players are protected through admittedly unprecedented times.

Ultimately the league committed to an arbitrary $109 million salary cap, a flat figure nearly identical to last season. The league and union are expected to agree on an increased escrow rate for the new season as well, potentially as high as 17-18% for the next two years.

Spreading out the impact of that increased escrow hit was one of Schwartz’s priorities as an agent.

“Is it really fair for players that are free agents this year or players that have just a few years left in the league? They are going to be adversely affected if all the money has to get paid back in one year versus spreading it out,” Schwartz said.

While the exact terms of the 2020-21 campaign haven’t yet been made official, the fact that so much has already been roughly agreed upon and put in place bodes well for the league and for basketball fans everywhere. That the NBA and the NBA players union seem so willing to compromise through uncertain times is essential.

Why? Because there’s no end to uncertainty in sight.

It’s the middle of November now and we’re one week out from the 2020 NBA Draft. In less than seven days an entire class of prospects will be onboarded into the league despite a complete annihilation of the traditional pre-draft process.

“We did it all virtually, which was the strangest,” Schwartz recalled of the recruiting process, one that normally involves constant travel to and from visits with prospects and families. “Doing Zoom presentations from my home and having my kids Zoom bomb me, that was weird.”

Schwartz understands that there’s more to it than simply moving everything online, however, and is careful to ensure that his newest clients, including James Wiseman and Onyeka Okongwu, have every opportunity that they would in a pre-pandemic world.

“We’ve been really organized with our guys. Instead of doing it together, what we’d normally do, they’re all doing it individually,” Schwartz said.

Those efforts, which include individual pro days for each of Excel’s clients, won’t be in vain. Even in a post-shutdown world rocked by uncertainty, it pays to have dedicated representation providing a sense of calm in the storm.

That’s as true for the league’s incoming class of rookies as it is for the veterans who had the rug pulled out from under them that fateful night in March.