Overlooked in high school and at Murray State, 2015 Draft prospect Cameron Payne is finally getting the hype he deserves. 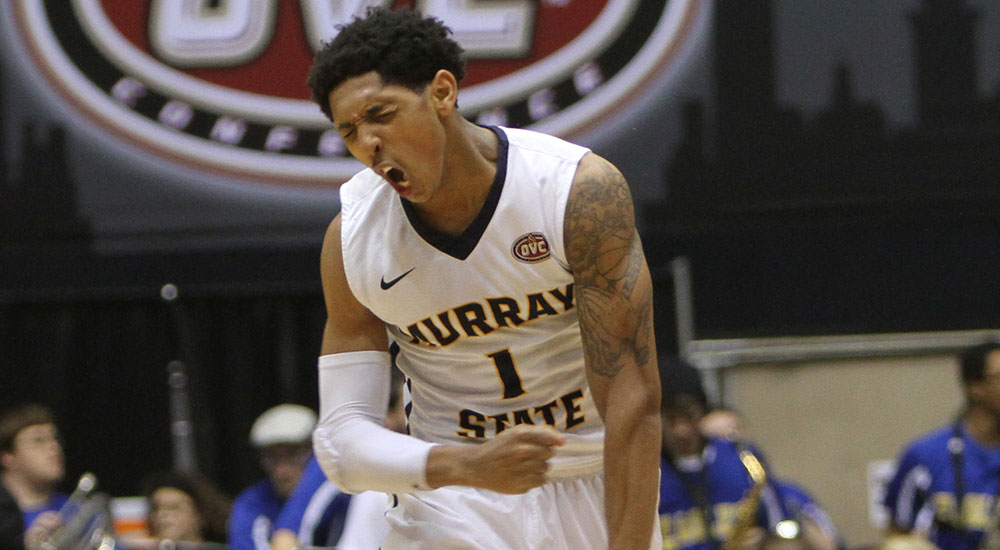 The dream he’s living is perfect considering the advice the fast-rising point guard received when he declared for the Draft, following a stellar sophomore campaign.

“I’m dreaming and I can’t wake up,” he says, laughing during a recent phone interview. “I’m just sleeping really good right now, everything has been a dream.”

After being overlooked as a legitimate hoop prospect since his early childhood days in Memphis, TN, you can excuse his prolonged slumber. You can also forgive him for obsessing over the latest mock drafts, and the various online media reports that have Payne’s stock skyrocketing into the lottery conversation leading up to this month’s Draft.

“You know why I look at all of the mock drafts? It’s because I wasn’t on any of them up until right now,” Payne says. “Now that I’m on them and my name is on them, I’m definitely going to follow them [laughs].”

The once non-existent chatter around Payne is now full-blown hoopla, as his current Draft trajectory is suddenly being compared to the sudden rise of other note-worthy mid-major point guards Damian Lillard and Elfrid Payton.

“The fact that people are talking about me so much right now must mean that I’m doing something right,” he says with a sudden excitement to his voice. “I definitely want people and the NBA teams to be comfortable with me. That’s very important. When people really get the opportunity to meet with me, and talk with me, a lot of good is going to come out of it.”

That much has been true, as Payne has already worked out for the Indiana Pacers—who hold the 11th overall pick. Payne also has upcoming workouts scheduled with the Los Angeles Lakers (2nd pick), the New York Knicks (4th) and the Sacramento Kings (6th). The gap seems to be closing fast between Payne and D’Angelo Russell and Emmanuel Mundiay in the battle of this Draft’s best point guard.

There have been national media reports and several mock drafts suggesting that the Oklahoma City Thunder are eyeing Payne at No. 14, but with the way things are trending right now, Payne could be gone by the time Commissioner Adam Silver announces that the Thunder are on the clock.

So just how did things turn so drastically in such a short amount of time?

You can partly attribute that to the gaudy numbers Payne put up this season for the Racers: 20.2 ppg, 6.0 apg and a PER of 30—ranking him in the top 15 in the NCAA in all three categories. He helped lead his team through the Ohio Valley regular season undefeated, including a 25-game winning streak—the eighth-longest winning streak in college basketball since 2002, a trip to the NIT, and topped it off by being named the Ohio Valley Conference Player of the Year.

You can fully attribute his growth and ascension as a big-time player to the enormous chip on his shoulder that he’s played with since he started getting serious about basketball. This comes from not being heavily recruited during his peak high school years or while at the AAU level. Payne also notes that there were some previous and lingering doubts about his still developing slight frame and the level of mid-major competition.

Those who watched him closely and carefully, though, saw a sweet-shooting, crafty, left-handed point guard from the Memphis suburb of Bartlett, who willed and worked his way into becoming a team leader who is on the verge of playing professionally.

“Obviously, he’s from my hometown of Memphis, so I’ve been closely watching him develop as a player since he was a kid,” says Payne’s agent, Travis King, of Relativity Sports.

“I really thought he had a good chance since about the 11th grade,” King says of Payne. “I didn’t know it would happen this fast for him, but he had a great season this year, and now he’s really working hard with his training and improving his game. I really believe that over time Cam will be the best pure PG in this Draft class, and that he can become a special player at the NBA level.”

Before coming to Chicago for the NBA Draft Combine in May, Payne added nine pounds of muscle to his body, as most draft analysts had questioned his strength and ability to get into the paint. At the Combine, Payne recalls how he was hanging out with all of the more heralded names, from the bigger programs who were seen frequently on national TV all season long. The players that didn’t elicit a “who? ” after their names were being mentioned like Payne before now.

“It was definitely a big difference,” Payne says of the Draft Combine. “I’ve played against some of them guys, but the players I had on my (AAU) team, they all went to those big Top-100 type camps. I didn’t go. Honestly, the Combine is something that you really have to go through yourself, because it’s a great atmosphere and it’s a one-time thing. So you know you just have to do the best you can. It was a great time.”

Since finishing his sophomore year and declaring for the Draft, Payne has been working out and training daily at the IMG Academy in Bradenton, FL. Other NBA Draft prospects like UNC’s JP Tokoto, IMG’s Satnam Singh and Florida’s Chris Walker have also been participating in the intense pre-Draft training and nutrition program.

Current NBA players such as Hood, Orlando Magic forward Moe Harkless and Dallas Mavs forward Dwight Powell also regularly workout at IMG during the offseason. Payne’s focus has mostly been on increasing his strength and conditioning and extending his three-point range to the NBA distance while fine-tuning other aspects of his game, like his ball handling and footwork. Payne also spends time studying current NBA players such as Tony Parker and Rajon Rondo.

In between his team workouts and keeping up with the latest buzz surrounding the Draft, Payne has been content to just relax while spending some of his downtime playing the only video game that he plays, NBA 2K15.

“I’ve being a big fan of the game and franchise for so long,” he says. He can’t wait to play as himself once the 2K16 edition rolls around—of course with some modification for a player that’s been overlooked for so long.

Giving how fast everything is happening to a player that’s never been handed anything, Payne doesn’t ever hesitate to remind himself of the fire that has fueled him up until this point. It’s the same motivation that he says won’t be diminished with the riches of a new NBA contract and from playing at the highest level.

“The chip on my shoulder is going to stay there forever,” he says. “Me being overlooked, it helps me. When people have criticized me, it just makes me go harder. It’s just my knack for being so competitive, being a leader and not wanting to lose and to all the people that didn’t think I was very good. That chip is not going anywhere because when I make it to the NBA, I’m back at the bottom as a rookie, so I have to keep that chip on my shoulder. I’ll be the low guy on the totem pole again next year and I’ll have to work my way back up in the league. I haven’t done anything yet.”

Payne will travel to New York in a few weeks for Draft night and will be sitting in the same Green Room as the other big-name, highly recruited players that are now his peers.

He won’t be hard to notice.

Bright smile, clean new suit, his family nearby, and finally waking up to his dream come true.