Can Federal Mediator Help Save the NBA Season? 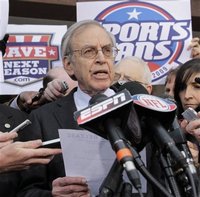 David Stern has created yet another self-imposed deadline for this NBA season (which may or may not be doomed): get close to getting a deal done this week, or the entire season could be toast.

And in steps federal mediator George Cohen, the man entrusted with saving the League and the players’ union from themselves.

Though Cohen’s breadth of knowledge and experience in these types of contentious negotiations gives him a certain amount of clout, it wouldn’t be wise to expect a miracle out of the scheduled meetings with Team Stern and Team Hunter.

One prominent NBA veteran agent/attorney, Steve Kauffmann, believes Cohen is the right man to recsue the NBA season. “This arbritrator is an extraordinary individual,” said Kauffman, who has pled cases before Cohen when he did some arbritration work for the Players Association. “The thing about him is, he’s not just good, fair, insightful. He doesn’t have a big ego, there’s no pretense to him. It would be impossible for the owners not to respect this man. I’ve met thousands of lawyers in my life. He may be the best one I’ve ever seen.” Cohen, appointed by President Obama to his position in 2009, will meet separately [Monday] with the Players Association and Stern’s NBA group. [Tuesday], Cohen and the two sides meet together. Cohen’s recommendations are not binding, as neither side has to go along with them.

Cohen is very familiar with the NBPA, serving as general counsel to the union in the 1980s and 1990s, and was front and center in the 1995 CBA negotiations. One NBA source, familiar with Cohen, said, “George is the only guy I’ve seen as smart as David Stern. And David knows it.” Kauffman was an NBA player agent for 31 years before becoming an attorney for coaches and management. Kauffman represents Donnie Walsh, now a Knicks consultant. Kauffman said he has noticed an increase in calls from NBA teams in recent days, looking to “expediate” contract talks with assistant coaches. Kauffmann sees it as an indication owners believe something big is about to happen.

Time is running out for the 2011-’12 NBA season, and both sides seem to be more entrenched than ever before. This federal mediator represents perhaps the best (final?) chance for a deal to get done soon.

Hey, no pressure or anything, George Cohen.