Can the NBA’s Christmas Day Games Be Saved? 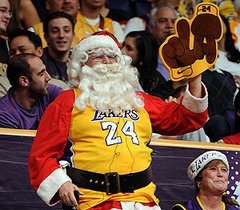 NBA labor talks have resumed, with the hope that a shortened season can begin on Christmas Day.

Following talks on Tuesday and Wednesday, negotiations are expected to continue tomorrow in New York CIty, with the League reportedly pushing to have a truncated, 66-game season starting on December 25th.

If a deal is reached this weekend, it would give the league the approximately four-week window it needs to prepare for a Dec. 25 opening day. That date is enticing to everyone involved, allowing the league to take advantage of the holiday setting and a captive television audience that, they hope, might be in a forgiving mood. Christmas is also the traditional tipoff for the N.B.A.’s national TV schedule. A tipoff before New Year’s provides enough time for a compressed, 66-game schedule, 16 fewer than normal, despite starting eight weeks late. It would require extending the regular season into late April and pushing back the finals by a week.

Before owners and players can contemplate any of that, they must resolve the same prickly issues that killed talks two weeks ago: how to restrict the top-spending teams while still ensuring a robust free-agent market. The parties essentially picked up where they left off Nov. 10, discussing a proposal that includes a 50-50 split of revenue, shorter contracts and tougher spending restrictions. The players rejected that deal, but on the basis of a half-dozen mechanical issues which, in the grander scheme, are fairly minor. They have already conditionally agreed to the 50-50 split and most of the new payroll restrictions. Neither side has tried to put any new issues on the table, or backed away from previously negotiated points, according to those informed on the talks. That gives the parties hope that a deal not only can be achieved, but can be consummated quickly.

Jeffrey Kessler, the highly-controversial lawyer for the players’ side (and someone that David Stern has a deep, personal dislike for) is said to no longer be part of the negotiations; respected mediator Jim Quinn has seemingly taken his place, with the hope being that he can help push a deal through.

Given all that’s happened since the NBA lockout began in July, there’s no reason to be optimistic that an agreement can be reached over the weekend. But, at this point, what else can we do but hope?