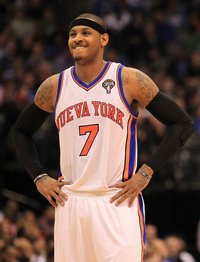 The Knicks are an unsightly 6-6 since acquiring Carmelo Anthony from Denver. And though it was expected that they would struggle defensively, even by New York’s standards, the effort on that end of the floor has been truly abysmal.

Now, believe it or not, but head coach Mike D’Antoni actually has a defensive plan — several of them, in fact. Which, according to Carmelo Anthony, is part of the problem.

With the squad still trying to mesh, Melo thinks it would be best to limit the number of defensive options, thus minimizing the confusion and errors.

“[We have to] come up with a scheme or a couple of schemes we’re going to stick with and do better at,” Anthony said yesterday. “Right now, one game we come in with one scheme. Another game we come in with a different scheme. I think it’s a bit confusing at times.” It was the second straight day Anthony took issue with the team’s defensive game plan. Following Tuesday’s 119-117 loss at Indiana, Anthony questioned the defense on Tyler Hansbrough, who played like a beast in two games against the Knicks, notching 59 points and two consecutive career highs.

“I don’t think we made adjustments to him at the top of the key, especially after the game he had in the Garden,” Anthony said in the visitor’s locker room Tuesday. “I’d think we’d have made adjustments after that.” The struggles of the Knicks’ defense has grown to alarming levels. Back-to-back losses to the mediocre Pacers — who scored 119 points Tuesday night and won it on a last-second Danny Granger jumper — have sent chills through the Knicks’ fan base once euphoric about the Melo blockbuster.

Widely considered as some kind of offensive genius, it’s more than a little ironic that Mike D’Antoni’s fate in New York will be determined largely by how well his team plays defense going forward.

Best of luck with that, coach.