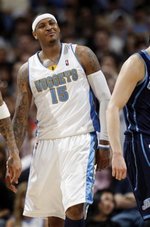 Harpring, once one of the League’s toughest — and certainly one of its most physical — defenders now works for the Utah Jazz on the television side of things, but that hasn’t stopped him from having an impact on the Utah/Denver series.

Last night, his advice to former teammates paid major dividends, and the surprise of everyone, it’s now a tied-up affair heading back to Utah.

Prior to Game 2, Matt Harpring encouraged Jazz defenders to get extra physical with ‘Melo, because according to Harpring, that would rattle Anthony. The Nuggets’ superstar forward eventually fouled out late in the fourth quarter (and struggled with his shooting) and his team lost last night, and afterward, team exec Rex Champman complained about Harpring’s impact.

Rex Chapman, Denver’s vice president of player personnel, said after Game 2 that “when flopping and flailing is rewarded, it is a tough game to play for a guy (Anthony) who does not know how to do either.” Chapman also pointed to the quotes from former Jazz player Matt Harpring, who in previous seasons had sometimes rattled Melo with physical punishment on the defensive end.

“All day, I read articles where Matt Harpring was saying the Jazz need to dirty the game up, to hold, grab and lean on Melo as much as possible. I guess the players read those quotes as well. It looked like they took it to heart. It was just frustrating. I think three of Melo’s fouls were offensive and he did have guys leaning on him all night. So I guess they did what they had to do. Now that we know that this sort of play will be allowed, I believe we will be able to adjust.”

Gotta love the head games that teams play with one another at this time of the year.

With the next two games being in Utah’s extra-loud arena, Denver will need to come up with its own psychological ploys if they hope to wrestle back homecourt advantage.