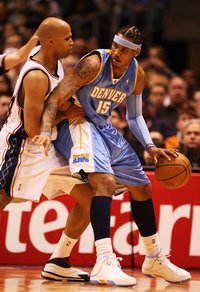 When the reports about New Jersey and Denver discussing possibly trading Carmelo Anthony first came out, they were lightly brushed aside as nothing more than “exploratory talks“. Now, it seems as though things are getting a little more serious.

With the draft lottery taking place tomorrow, the Nets and Nuggets are apparently busy working the phone lines to make a blockbuster trade happen.

Multiple league sources said the Nets and Nuggets have discussed a blockbuster deal that would bring Anthony and Marcus Camby to New Jersey. In return, Denver would get a package that includes Richard Jefferson, Marcus Williams, Keith Van Horn’s contract and the Nets’ lottery pick.

There likely is more involved to make the salaries match up, but the sources said the trade could happen, making Tuesday even more important.

That sound you hear? It’s that of Allen Iverson throwing up in his mouth a little.

Should this rumored trade go through, the makeup of both teams would obviously go through a massive change. And it would take a whole lot to convince Nuggets fans that they got the better of the deal.