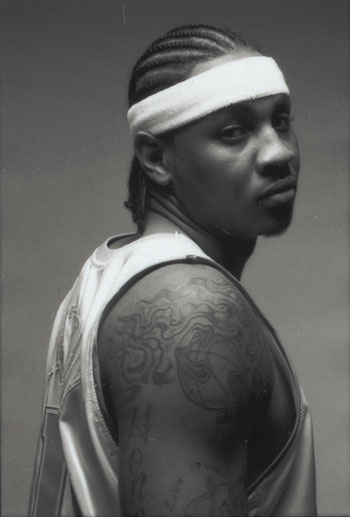 This is not the first time his emotions have given him away.

You remember the joy, sheer, childlike joy, that shined through at the end of the title run at Syracuse. Cool as dude looked all season—and as a freshman carrying his team to an NCAA championship, cool was the only thing he could’ve been—he couldn’t hide the gleeful smiles when the trophy was finally in his grasp.

You recall the frustration, that rare moment in an otherwise amazing rookie year, when he pulled a Pippen at the end of a lopsided loss. The frustration itself you could understand; such blatant inability to suppress it was harder to take.

And you’re familiar with the loyalty—call it a value or a principle or whatever, but loyalty is undeniably some emotional shit—that has dented his public rep more than once. Carmelo Anthony is unashamedly and relentlessly dedicated to his people, and since not all his people are as consciously aware of things like the repercussions that low-level criminal behavior can have on their man’s image, Melo has occasionally paid a price for staying true to his own.

More than your average hoop hero, Carmelo wears his heart on his Zensah. Consider it good news, then, that when we land in Denver a few weeks into the season, everything about Melo points toward emotional contentment. “Right now,” he says, grinning easily, “I’m happy.”

He seems it. Bleary-eyed after a late-morning practice that followed a late-starting shoe release party in L.A. the night before, Melo is groggy but enthusiastic as we arrive for an overdue interview and photo shoot. Maybe it’s the weather, a perfect mid-November afternoon that’s warm and sunny enough to justify sitting outside for lunch at one of the sidewalk cafes in the city’s trendy Larimer Square. Maybe it’s domestic bliss, the sort that comes when your people are taken care of and your first child is on the way.

Or, then, it could just be basketball; knowing that your team has turned it around after an 0-3 start (and is in the midst of winning 10 of its next 12 games) and that, nearly a month into the season, you’re the leading scorer in the NBA.

“The game is fun to me right now,” Melo says. “It’s all positive. We started off slow, and it took us a couple games to gel together—we had some new guys, trying to fit them into the system. But I’m happy where we at now. We’re headed in the right direction.”

That they were, standing 10-5 through the first week of December and showing an offensive balance that bodes well for their playoff chances. The L’s highest-scoring team had five players averaging double-figures, most notably JR Smith, whose surprising 17 per were helping Carmelo work that much more efficiently. And Melo was responding, averaging 32.2 ppg on 52 percent from the floor and 83 percent from the line, all of which would be career highs if they hold. Add in his nightly 5 boards, 4 assists and 2 steals (and forgive him the 4-plus turnovers that are the only knock on his game at the moment) and you have a viable MVP candidate. No wonder he’s in a good mood.

There should be no shock at what Melo’s up to this year; this is a young man who averaged 21 and 6 as a 19-year-old rookie, and posted pretty much identical numbers in his “disappointing” second season, then went for 27 per in leading the Nuggets to their third straight playoff appearance last year. We knew he was good. The question now—how much better can he get?—is one he’s clearly thought about himself. “I think I can get a lot better,” Melo says. “It’s more mental. It’s my fourth year in the League, and I see what the NBA is about, what the game is about.”

He’s somewhat vague on specifics, a not uncommon trait among guys at his level, and maybe because there’s nothing he doesn’t already do pretty well. So we ask Doug Moe. The winningest coach in franchise history thanks to his highlight-filled run in the ’80s, Moe is back on the Denver bench in his third season as an assistant to George Karl. Better than most, Moe knows a genius-level scorer when he sees one. And in Carmelo Anthony, he definitely sees one.

“I’d say his biggest negative, for a superstar,” Moe begins, making clear he considers Melo nothing less than that, “is that he still feels like he needs to prove himself—when he doesn’t, really—and he will sometimes force things. He’s just so competitive, and he wants to prove he’s the best, so he’ll take some bad shots. He feels he has to score to be important to the team, and a lot of times he doesn’t have to. As he goes along, he’ll learn more and more.”

As weaknesses go, this is one most coaches will be happy to roll with. We catch up with Moe on a Friday night in Philadelphia, just 10 days into the new season. It’s the first night of a four-game Eastern road trip that threatens to turn the Nuggets’ 0-3 start into a full-on crisis. Thirty-six hours earlier, Melo was floored by a migraine; early on against the Sixers, he plays as if his head still isn’t right, starting out 1 of 5 from the field. But then a couple of buckets in transition help him find a rhythm he won’t lose all night. By halftime he’s got 13 points on 6 of 11 shooting, and at one stretch he hits 8 of 9 shots from the floor. Denver blows most of a double-digit lead down the stretch (in addition to scoring more points than anyone this season, they’re giving up more than anyone, too), but Melo once again justifies his new-school Jerry West rep, hitting back to back jumpers midway through the fourth, then four straight free throws in the final 10 seconds. Nuggets win, and Melo finishes with 31 points on 12 of 21 FGs and 7 of 8 FTs—pretty much exactly what he’s on pace to average for the year.

“Whether you give him space or get up on him, he just tries to take advantage of everything you do,” Willie Green says after a fruitless night spent trying to slow Melo down. “With a guy like that, it’s like, pick your poison.”

Just as that stat line is roughly equivalent to his season-long numbers, there’s a lot about this night that nut-shells Melo’s overall game. There’s the clutch play, of course, both in getting to and hitting from the stripe, and in wetting those jab-stepping 17-to-20-footers that he might as well apply for a patent on. And on the flip, there’s the tendency to do too much, which Moe pointed out pregame and Melo confirmed by missing four shots in the opening five minutes.

But mostly, there’s a great game from a great player who did exactly what he needed to make sure his team got a win it had to have. More than anything, that’s an increasingly accurate description of what Carmelo Anthony brings to the floor every night.

Again, if you’ve been paying attention long enough—from his high school days, or from that year at ’Cuse, or from the start of his NBA run—none of this is unexpected. But even the late arrivals have no excuses; even if you only tuned in, say, in August, just in time to see USA Basketball try and fail to figure out the international game, you can’t be surprised. Not if you watched Carmelo Anthony score a team-best 19.9 per and land on the World Championship’s five-man all-tournament team. For those two weeks, Melo was arguably the best player on the planet. Don’t think that doesn’t mean a lot.

“It was nice,” Melo understates, before letting slip how nice it was. “For the whole world to see what I was able to do out there, I was like, Damn, it’s due. It’s due for people to see what I’m about.”

Impressive as it was to see Melo shine among what was, in theory, a gathering of the world’s best players, it was how he compared with his own teammates—fellow captains LeBron James and Dwyane Wade in particular—that most impressed Stateside observers.

Great friends and better rivals, these Class of ’03 alumni have the makings of the most fascinating trio in League history; they attend each other’s charity events and stay in constant touch on the road, and yet, increasingly, each figures to be the others’ biggest obstacle to MVPs, scoring titles and ’chips. You didn’t need an SI cover to tell you that these guys are set up to be the face of the League for the next decade or so.

More than anything, what Bron, Dwyane and Melo have in common are outsized
allotments of competitiveness; these guys get along because they can relate to each other, but the traits they relate to make each of them want to beat the other that much more. “Oh, it’s motivation,” Melo says. “But when I say motivation, it’s in a good way.”

Well, mostly. “I think he’s every bit as good as any of ’em—which is good and bad,” Doug Moe says of Melo’s place in the ’03 Draft rivalry. “It pushes him to be better, but it’s pressure he puts on himself.”

But maybe the pressure is easing now. Success will do that, and it’s been a pretty successful few months for Carmelo Anthony, Basketball Player. It’s been good for Melo the man, too; he signed that long-term extension last summer, he’s expecting a son in the spring, he’s carrying the Jordan line in style, and he’s delving seriously into film and music production. He is, at 22, growing up.

“I’m way, way more mature than I was,” he says. “I just see things more clearly; things make more sense to me now. People don’t realize, I went from being a boy to a man overnight—18 years old, payin’ taxes, payin’ bills, takin’ care of entourages, takin’ care of the hood back in Baltimore. And I still do all that. But at that age, I was just like, I’m happy, I’m livin’ in the moment.”

Now, he says, “I think just knowing what’s ahead of me, what’s in my future, it humbled me. That’s just making me more comfortable on the court. And when I ain’t laughin’ and smilin’ on the court, I don’t play right.”

For the rest of this story and much more on Carmelo Anthony, pick up SLAM 105, on newstands now.